[AUTOGRAPH LETTER, SIGNED, FROM STEAM BOAT PIONEER JOHN FITCH TO HIS FRIEND, ROYAL FLINT, ON THE SITUATION OF THE CONTINENTAL ARMY IN NEW YORK] 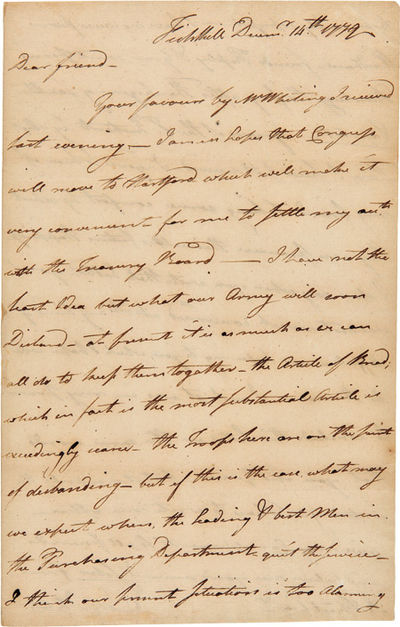 by [Fitch, John]
Fishkill, N.Y., 1779. [2]pp. on recto and verso of first leaf, and docketed on verso of integral blank leaf. Faint fold lines. Near fine. A letter from the enterprising John Fitch, future steamboat pioneer, during his checkered service in the Continental Army. Having entered into an unhappy marriage, Fitch abandoned his wife and young son in Windham, Connecticut, and journeyed south to New York and New Jersey. He eked his way by performing small tasks requiring a craftsman's skills, finding himself near Trenton at the outbreak of the Revolutionary War. Until 1780 he served as a militia lieutenant and gunsmith, in the meantime making a handsome profit by selling tobacco and other goods to the Valley Forge army. Towards the end of this service, in 1779, Fitch penned the present letter to an acquaintance named Royal Flint. It was a difficult time for the army, as Fitch relates: "Your favour by W. Whiting I received last evening. I am in hopes that Congress will move to Hartford which will make it very convenient for me to settle my acct. with the Treasury Board. I have not the least idea but what our Army will soon disband - at present it is as much as we can all do to keep them together. The Article of Bread is exceedingly scarce. The troops here are on the point of disbanding - but if this is the case, what may we expect when the leading & best men in the Purchasing Department quit the service. I think our present situation is too alarming to be easily expressed. I have no news from Windham - friends Ripley & Grow went from Danbury the day after Thanksgiving for the Capitol. Yours of the 1st. Instant by Majr. Starr I have just received. I rejoice to hear of my friends taking some comfort by which they can promise themselves future happiness. I dare say when you wrote that letter you were not much concerned about any kind of misfortunes ever happening to you, which I hope will be the case...." Despite Fitch's pessimism, the army did not disband, though personality conflicts between himself and his superiors occasioned his prompt dismissal from it. From New Jersey he set off down the Ohio, was captured and released by the British, and ultimately established himself in Bucks County, Pennsylvania, where he began his experimentation with steam propulsion. Although he made some advances, most notably his ship Enterprise, which purportedly achieved a speed of eight miles an hour on the Delaware River, his efforts were a financial failure. Despondent, he committed suicide in 1798 in Bardstown, Kentucky. Despite his failures, Fitch greatly advanced the development of steam power in the United States. Unfortunately, the sort of hopelessness that drove him from his unhappy marriage and is displayed here would plague most of his endeavors and contribute to his hapless end. Thomas Boyd, POOR JOHN FITCH (New York: Putnam, 1935). ANB 8, pp.40-42. (Inventory #: WRCAM30968)
$7,500.00 add to cart or Buy Direct from
William Reese Co. - Americana
Share this item

NEWS OF THE PLAINS AND ROCKIES 1803-1865. ORIGINAL NARRATIVES OF OVERLAND TRAVEL AND ADVENTURE SELECTED FROM THE WAGNER-CAMP AND BECKER BIBLIOGRAPHY..

by White, David A., editor

Spokane : Arthur H. Clark Company , 2001
(click for more details about NEWS OF THE PLAINS AND ROCKIES 1803-1865. ORIGINAL NARRATIVES OF OVERLAND TRAVEL AND ADVENTURE SELECTED FROM THE WAGNER-CAMP AND BECKER BIBLIOGRAPHY..)
View all from this seller>