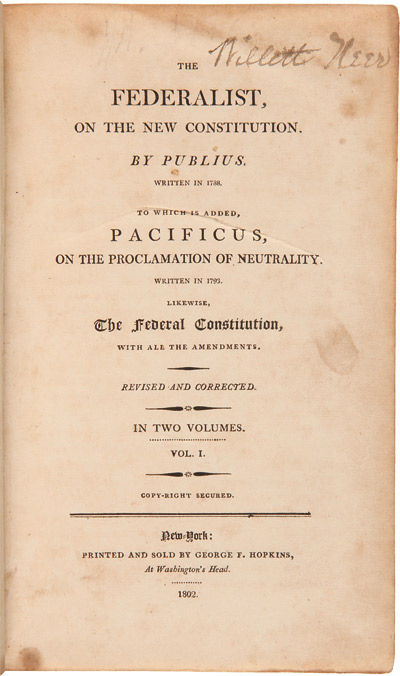 by [Hamilton, Alexander, James Madison; and John Jay]
New York: Printed and sold by George F. Hopkins, 1802. Two volumes. viii,317,[1]pp., with two pages numbered 167 and two pages numbered 168, as noted on the errata sheet and with page numbering 263-270 repeated; v,[3],351pp. Contemporary sheep, gilt morocco spine label on first volume (lacking on second volume). Hinges of second volume repaired, boards quite rubbed and edgeworn. Contemporary ownership signature on titlepage of both volumes. Moderate tanning and staining. Good. In cloth chemises and half morocco and cloth slipcases, spines gilt. Styled the "revised and corrected" edition on the titlepage, with additions to the first edition of 1788. "Most famous and influential American political work. Written in collaboration with Jay and Madison" - Howes. Ford attributes editorship of this edition to John Wells, though Sabin attributes it to William Coleman, noting it as "the last issued during Hamilton's life...." This edition is expanded by the addition of the federal constitution and the first eleven amendments, and a series of articles written by Hamilton under the pseudonym "Pacificus," defending Washington's "Neutrality Proclamation" of 1793 regarding the Anglo-French war. Arguably the most complete edition, and the only other English language edition issued in Hamilton's lifetime, in the preface it identifies Hamilton, Jay, and Madison as the authors but does not specify who wrote which essays; "it was at first intended to mark the numbers distinctly which were written by each; but considerations have since occurred which would perhaps render this measure improper." Clearly issued by Hamilton partisans, the preface implies that virtually all of it was Hamilton's work, and the republication of the Pacificus essays (written in opposition to Madison) confirms the Hamiltonian slant. FORD 21. HOWES H114, "aa." COHEN 2818. SABIN 23981. DAB XI, pp. 312-13. Ron Chernow, ALEXANDER HAMILTON, pp.44, 48, 188, 603-6. (Inventory #: WRCAM36637G)
$14,000.00 add to cart or Buy Direct from
William Reese Co. - Americana
Share this item

THE INTEREST IN SLAVERY OF THE SOUTHERN NON- SLAVEHOLDER. THE RIGHT OF PEACEFUL SECESSION. THE CHARACTER AND INFLUENCE OF ABOLITIONISM

Charleston : Steam-Power Presses of Evans & Cogswell , 1860
(click for more details about THE INTEREST IN SLAVERY OF THE SOUTHERN NON- SLAVEHOLDER. THE RIGHT OF PEACEFUL SECESSION. THE CHARACTER AND INFLUENCE OF ABOLITIONISM)