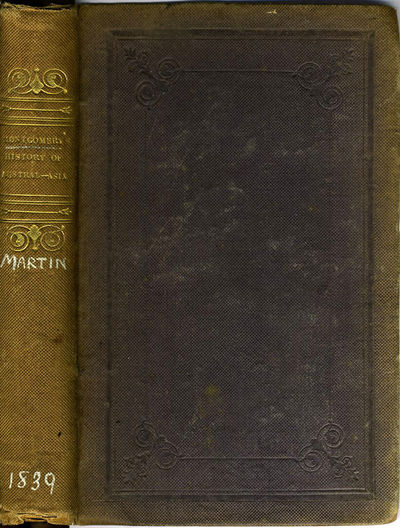 by Martin, R. Montgomery
London: Whittaker & Co., 1839. Second edition. Hardcover. Very good condition. Montgomery Martin issued this small format edition of his "History" in the 1830s - by the 1850s, he collaborated with John Tallis and his history series, of Australasia and the British colonies, were accompanied by John Tallis' handsome maps with vignette views. With the bookplate of Charles R. J. Glover, (1870-1936) who was the Mayor of Adelaide from 1917 to 1919. Ferguson 2801. Enlarged from the London 1836 edition in some areas . Lg.12mo, vii [1], 416pp, 2 folding colour maps (New South Wales & Van Diemens Land) & frontispiece ( Sydney). Original purple blind & gilt stamped cloth, spine and board edges faded . Light foxing of tissue paper at fronticepiece. (Inventory #: 21764)
$155.00 add to cart or Buy Direct from
Antipodean Books
Share this item
Antipodean Books, Maps & Prints, David & Cathy Lilburne
Offered by

30 day return guarantee, with full refund including shipping costs for up to 10 days after delivery if an item arrives mis-described or damaged.
More from this seller

The Trooper Police of Australia, A Record of Mounted Police Work in the Commonwealth from the Earliest Days of Settlement to the Present Time

London : Andrew Melrose , 1911
(click for more details about The Trooper Police of Australia, A Record of Mounted Police Work in the Commonwealth from the Earliest Days of Settlement to the Present Time)

New York : Harper's Weekly , 1878
(click for more details about The Cricket Match between the Australians and the New Yorkers, with Portraits of the Australians. from Sketches and Photographs. Engraving)
View all from this seller>