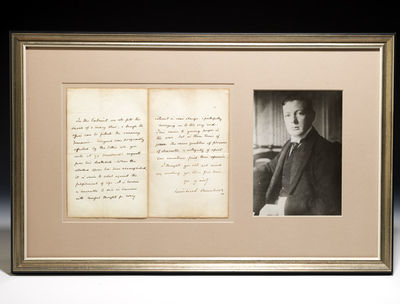 by CHURCHILL Winston
1928. Signed. CHURCHILL, Winston. Autograph letter signed. London, April 16, 1928. One folded leaf, measuring 8 by 5 inches folded and 8 by 10 inches open, on embossed Chancellor of the Exchequer letterhead. Framed with portrait of Churchill, entire piece measures 24 by 15 inches. $16,000.Autograph letter signed from Churchill to Lady Anne Cave, expressing condolences on the death of her husband, Viscount George Cave, the Lord Chancellor of the United Kingdom., handsomely framed with an early portrait of Churchill.Cave, a career politician who served first in the House of Commons and, after being awarded the title of viscount, the House of Lords, was appointed Lord Chancellor in 1922, a post he held until a few days before his death in March 1928. His imperturbable moderation, his persuasive urbanity, and his calm lucidity, as well as the innate sense of fairness of which these were the outward expression deservedly won for him the respect of all parties Lord Cave was a great public servant. If his distaste for every form of display and self-advertisement tended to give an appearance of conventionality and reserve to his public work, he had another side which he showed to those who enjoyed his friendship and whose affection he had won. He would not have wished any estimate of his career to be silent on the great debt which he owed to the lifelong companionship and constant inspiration of his wife. In Lady Caves books the reader is able to share some of the intimacies of his life (DNB). Churchills letter, dated April 16, 1928, reads, My dear Lady Cave, I venture to write & express to you my profound sympathy in y[ou]r grievous loss. My wife & I felt most keenly for you both in those tragic weeks. She is herself recuperating abroad from a dangerous illness, & I do not know whether she has had the strength to write herself, but I know how intensely she will share my sentiments, & as soon as she is strong enough you will hear from her. In the Cabinet we all felt the shock of a heavy blow, & though the office can be filled the vacancy remains. Everyone was poignantly affected by the letter wh[ich] you wrote at y[ou]r husbands request from his deathbed. When the allotted span has been accomplished, it is vain to rebel against the fulfillment of life. It is heroic & enviable to die in harness with careful thought for every interest in ones charge & faithfully carrying on to the very end. This came to young people in the war, but in these times of peace the same qualities of firmness of character & integrity of spirit can sometimes find their expression. I thought you would not mind my sending you these few lines. Y[ou]rs v[er]y sin[cere]ly, Winston S. Churchill. A fine Churchill autograph letter, handsomely framed. (Inventory #: 77389)
$16,000.00 add to cart Available from
Bauman Rare Books
Share this item