An Abridgement of Portlock and Dixon's Voyage Round the World 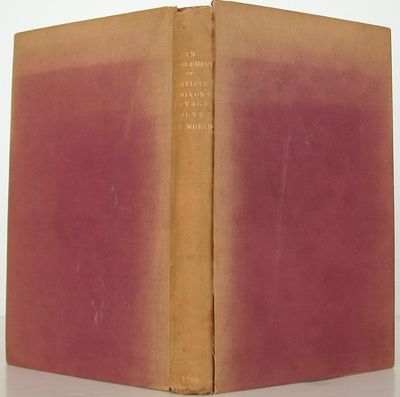 by Portlock and Dixon
London: Printed for John Stockdale - and George Goulding, 1789. 1st Edition. Hardcover. Very Good/No Jacket. A contemporary abridged edition of the principal account of the first commercial voyage to the Northwest Coast and the first English voyage to visit Hawaii after that of Captain James Cook. Contains a large map bound in the front. Front free endpaper is detached, foxing throughout. A very rare abridgement of the classic book. In September 1785 Portlock and Dixon sailed from England. Portlock was in command of the larger vessel, the 320 ton (BOM) King George, with a crew of 59. Dixon's was in command of the 200 ton (BOM) Queen Charlotte, with a crew of 33. Dixon and Portlock sailed together for most of their three year voyage. They crossed the Atlantic Ocean, reaching the Falkland Islands in January 1786, and transited Cape Horn to enter the Pacific Ocean. They reached the Hawaiian islands on 24 May and anchored in Kealakekua Bay (where Cook had been killed in 1779), but did not go ashore. They took on fresh food at other Hawaiian islands and proceeded on to what is now Alaska. After two years of plying the waters, Portlock and Dixon departed North America, reaching Macao in November 1788. On their return Portlock and Dixon published an account of the voyage, based in part on letters written by William Beresford, the trader on the expedition. Housed in a custom-made collector's slipcase. (Inventory #: 108157)
$4,500.00 add to cart or Buy Direct from Bookbid
Share this item
Bookbid Rare Books
Offered by

The Hitchhiker's Guide to the Galaxy

Harmony Books , 1980
(click for more details about The Hitchhiker's Guide to the Galaxy)
View all from this seller>