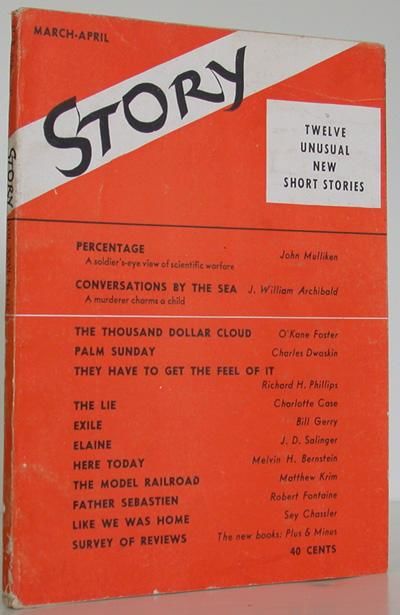 by Salinger, J.D.
Story Magazine, 1945. 1st Edition. Soft cover. Very Good. FIRST EDITION of J D SALINGER's "ELAINE" in STORY MAGAZINE Published in New York in March-April 1945, long before his first book, The Catcher in the Rye. Very good condition. Unusually nice and fresh copy of this fragile 65 year old artifact from Salinger's birth as a writer. In 1939, Salinger attended a Columbia University evening writing class taught by Whit Burnett, longtime editor of Story magazine. According to Burnett, Salinger did not distinguish himself until a few weeks before the end of the second semester, at which point "he suddenly came to life" and completed three stories. Burnett told Salinger that his stories were skillful and accomplished, and accepted "The Young Folks", a vignette about several aimless youths, for publication in Story. Salinger's debut short story was published in the magazine's March-April 1940 issue. Burnett became Salinger's mentor, and they corresponded for several years. (Inventory #: 0105996)
$300.00 add to cart Available from Bookbid
Share this item
Bookbid Rare Books
Offered by

Harmony Books , 1990
(click for more details about Last Chance to See)
View all from this seller>