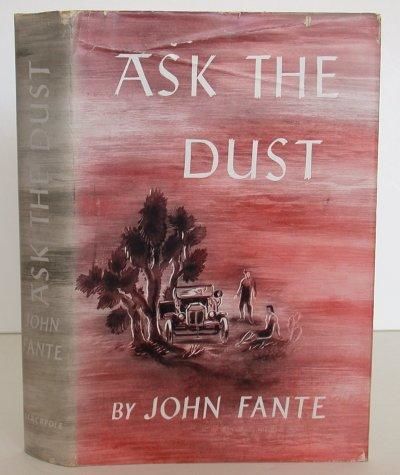 by Fante, John
Stackpole Sons, 1939. 1st Edition. Hardcover. Fine/Very Good. Stackpole Sons, New York:, 1939. Hardcover. First Edition. The extremely scarce first printing of Fante's magnum opus. Advance review copy with review slip and publisher's promotional material laid in. Book is Fine, tight, square and unread. The dust jacket is Very Good+, complete and quite bright on the front and rear panels, but sunned on the spine. An attractive example of this scarce first issue jacket, correctly priced at $2.00 and only mentioning Wait Until Spring, Bandini. Published by Stackpole Sons in 1939, which then became embroiled in a lawsuit with Adolf Hitler over the unauthorized printing of Mein Kampf. Stackpole Sons spent the publicity money for the novel on the lawsuit, muffling public recognition of this work for many years. It is estimated that fewer than 3,000 copies of the first printing were sold. Touted as the greatest novel ever written about Los Angeles by Charles Bukowski among others, it is a largely autobiographical account of a young Fante coming West. Bukowski also credited Fante with inspiring his own writing career. Additional photos available upon request. Fine. Very Good +. Comes in a custom-made collector's clamshell case with leather spine. (Inventory #: 107919)
$7,500.00 add to cart Available from Bookbid
Share this item
Bookbid Rare Books
Offered by

G. P. Putnams' Sons , 1969
(click for more details about Dune Messiah)
View all from this seller>