The Pastures of Heaven 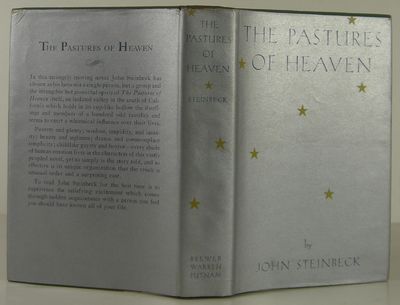 by Steinbeck, John
Brewer, Warren and Putnam, 1932. 1st Edition. Hardcover. Fine/Near Fine. NY, Brewer, Warren & Putnam, 1932, 1932. NY, Brewer, Warren & Putnam, 1932, first edition, dust jacket. Hardcover. His second book, Goldstone & Payne A2a, Morrow 14, this first edition is one of only 1,650 copies actually bound (from a print-run of 2,500 sets of sheets), only 650 copies were actually sold. According to Harry Thornton Moore in his first critical study of Steinbeck's works, The Pastures of Heaven "is the most popular of Steinbeck's three early books. It points the way to most of his subsequent writing. Near fine in a near fine dust jacket. Jacket 2 mm shorter than the book. Housed in a custom-made collectors slipcase. (Inventory #: 1114023)
$25,000.00 add to cart Available from Bookbid
Share this item
Bookbid Rare Books
Offered by

New York : Random House , 1956
(click for more details about A Christmas Memory)
View all from this seller>