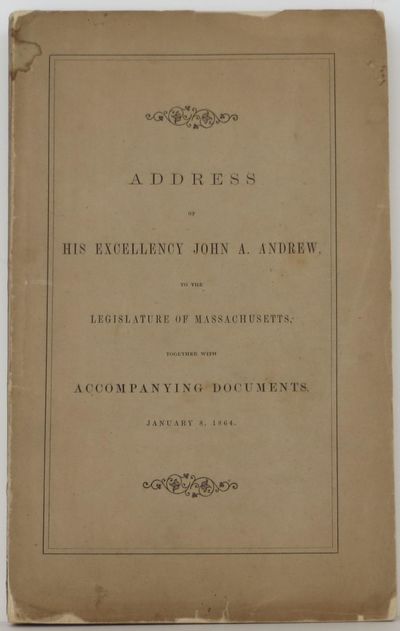 by Lincoln, Abraham
Wright & Potter, 1864. 5th or later Edition. Soft cover. Very Good. Boston. 1864. 88,110pp. plus folding map. Original printed paper wrappers. Internally clean, back cover not attached anymore, water stain at top of spine and around it. Very good. Devoted almost entirely to the Massachusetts war effort, published early in January, 1864. The folding map shows the Soldier's National Cemetery at Gettysburg, dedicated November 19, 1863, with the long speech of Edward Everett of Massachusetts and the short "Dedicatory Speech by President Lincoln," better known as the Gettysburg Address. Also printed is the "Programme of Arrangements" of that day, a list of Massachusetts soldiers killed at Gettysburg and buried there, and details of the cemetery. Monaghan notes this as an early printing of the Gettysburg Address. MONAGHAN, LINCOLN BIBLIOGRAPHY I:48. This historically significant and very early book publication of the Gettysburg Address, which may be the most important, and certainly best known, speech in US history, is extremely uncommon, and almost only found rebound or with the covers missing. This version, intact and in its original condition, is a coveted artifact of Americana. Comes in a custom-made slipcase. (Inventory #: 1403210)
$2,500.00 add to cart or Buy Direct from Bookbid
Share this item
Bookbid Rare Books
Offered by

The Clue in the Diary

Grosset & Dunlap , 1932
(click for more details about The Clue in the Diary)

The Clue of the Broken Locket

Grosset & Dunlap , 1934
(click for more details about The Clue of the Broken Locket)
View all from this seller>