The Tale of Benjamin Bunny 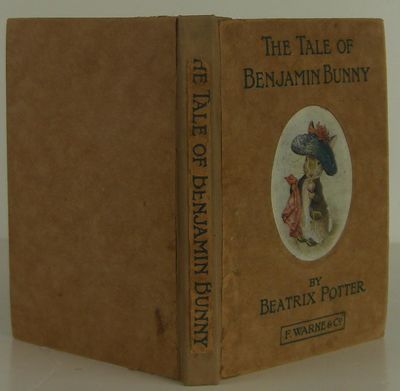 by Potter, Beatrix
Frederick Warne and Co, 1904. 1st Edition. Hardcover. Very Good/No Jacket. First edition, first issue. Sextodecimo. Orignal grey paper-covered boards, printed in dark green, illustration mounted on front board. Very good. Frontispiece and 26 colour illustrations by Beatrix Potter. 1904 printed on the title page and first issue points on page 15. Potter's introduction of Perter's cousin Benjamin, the fourth of her books to be published. The first printing was of 20,000 copies in September 1904, the second printing was of 10,000 copies in October 1904. They are apparently identical, and so, even thought this copy has all the first issue points, we do not know if it is the first or second printing. Housed in a custom made slipcase. (Inventory #: 1408102)
$950.00 add to cart Available from Bookbid
Share this item
Bookbid Rare Books
Offered by

And to Think That I Saw it on Mulberry Street

Vanguard Press , 1937
(click for more details about And to Think That I Saw it on Mulberry Street)

A Tree Grows in Brooklyn

Harper & Brothers , 1943
(click for more details about A Tree Grows in Brooklyn)
View all from this seller>