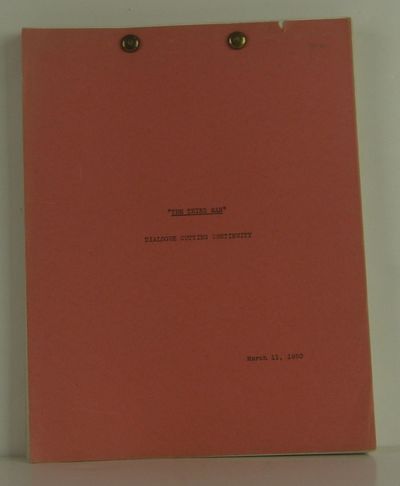 by Greene, Graham
David O. Selznick, 1950. 1st Edition. Soft cover. Very Good/No Jacket. March 11, 1950. 140 leaves. [Culver City: David O. Selznick] Typescript, original pinkish wrappers, typescript titles to covers. The in-house mimeographed script of the American adaptation as produced by David O. Selznick. Greene originally developed The Third Man as a film treatment in association with Alexander Korda and Selznick. Friction between the parties led to battles which would impact considerably on the finished film. These arguments were mostly due to Selznick's somewhat paranoid views regarding homosexuality, anti-Americanism and perversely Greene's casting of the central characters as British. Eventually many of the changes demanded by Selznick would be adopted including the nationality of the central characters, the abandonment of Holly for Rollo and the alteration to several minor roles. However many of the revisions evidenced in the present draft were refused by Reed and Korda which refusal would lead to the production of two quite distinct versions of the final release one for the US audience the other for general release. Whilst this draft is not the finished article, it allows great insight into the working process by which Selznick imposed his will onto this quintessentially British film. This script was previously owned by Serendipity Books and includes a copy of their descriptions of the item in 2008. It was later sold at auction by Bonhams, which sold most of Serendipitys inventory after the death of owner Peter Howard, and this comes with the sticker from that sale. (Inventory #: 1309224)
$2,500.00 add to cart Available from Bookbid
Share this item
Bookbid Rare Books
Offered by

Farrar, Straus and Giroux , 1979
(click for more details about The Right Stuff)

He Rather Enjoyed It

New York : George H. Doran Co , 1925
(click for more details about He Rather Enjoyed It)
View all from this seller>