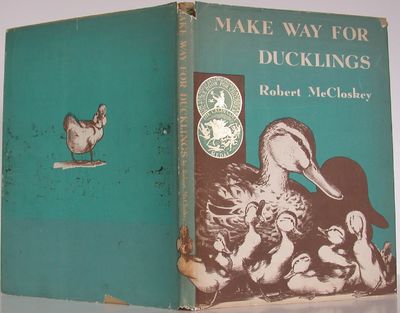 by McCloskey, Robert
New York: Viking Press, 1941. 1st Edition. Hardcover. Near Fine/Very Good. A true first edition in a first edition first issue dust jacket, with First Published August 1941 stated on the copyright page and no mention of the Caldecott Medal on the front flap of the dust jacket. The reference to the Medal was printed on the front flap of the dust jacket of the second printing. The Medal has been affixed to the front of the first issue dust jacket, which still has the first issue price of $2.00 on the front flap. A near fine book in a very good dust jacket with a small chip at the top of the spine, as shown in the photograph. Housed in a custom-made collector's clamshell case with leather spine with gold gilt lettering and decoration. Perhaps the rarest, most important and most desired of all the Caldecotts. A remarkably scarce book, read to death by or to children, and especially beloved in Boston, where the ducks are commemorated in bronze statues in the Public Garden. (Inventory #: 108027)
$22,500.00 add to cart Available from Bookbid
Share this item
Bookbid Rare Books
Offered by

Harmony Books , 1990
(click for more details about Last Chance to See)
View all from this seller>