An Address of the General Union for Promoting the Observance of the Christian Sabbath, to the People of the United States, Accompanied by Minutes of the Proceedings in its Formation, Its Constitution and Officers 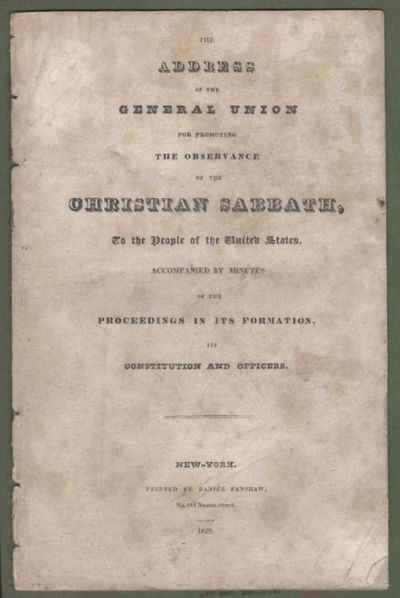 by [RELIGION, SABBATARIANISM]
New York: Daniel Fanshaw, 1828. First Edition. Softcover. Very good. 8vo, 10 pp, disbound. Light foxing, all else very good. Foundational document of the General Union, which according to one modern scholar "marked a new departure in the annals of American reform. Like the American Temperance Society, upon which it was closely modeled, the General Union was intended to unite like-minded individuals from throughout the United States in a single cause. According to Massachusetts reformer William Lloyd Garrison, this egalitarian approach to reform was destined to make the General Union 'the most efficient instrument in the cause of religion and public morality ever put into practice in any age and country....The linchpin of the General Union strategy was the Sabbatarian Pledge....Just as the American Temperance Society promoted complete abstinence from the evils of drink, so the General Union would promote complete abstinence from the evils of Sabbath-breaking. By taking the Sabbatarian pledge, General Union members bound themselves not only to abstain from all work, travel, and recreation on the Sabbath, but also to boycott all transportation companies that operated on this day" (John, Spreading the News, pp. 180-81). This pamphlet includes the General Union's Constitution, minutes of its first convention (held May 6. 1828), and a list of all delegates and officers, as well as an address to the people of the United States on the importance of Sabbath observance in the maintenance of civil liberty. Sabin 26914. (Inventory #: 16639)
$150.00 add to cart or Buy Direct from Walkabout Books
Share this item

A History of the Military Transactions of the British Nation in Indostan, From the Year MDCCXLV. To Which is Prefixed a Dissertation on the Establishments Made by Mahomodean Conquerors in Indostan

Madras : Re-printed by Pharoah and Co , 1862
(click for more details about A History of the Military Transactions of the British Nation in Indostan, From the Year MDCCXLV. To Which is Prefixed a Dissertation on the Establishments Made by Mahomodean Conquerors in Indostan)

Then Sings My Soul, 150 of the World's Greatest Hymn Stories (Two-Volume Set)

Norwalk, CT : Easton Press , 2007
(click for more details about Then Sings My Soul, 150 of the World's Greatest Hymn Stories (Two-Volume Set))
View all from this seller>