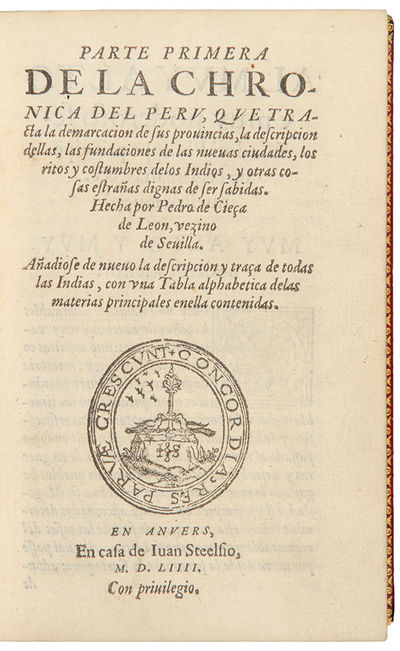 The primary account of the history of Peru before the conquest: one of two 1554 Antwerp editions of Cieza de León's highly regarded history of Peru, and the earliest obtainable edition, following the first edition in Spanish printed in Seville the previous year.

The author, the foremost soldier-chronicler of the conquest, served under Pedro de La Gasca in his campaign against Gonzalo Pizarro during the civil war in Peru in the years following the conquest. "After the end of the civil war, he travelled extensively throughout Peru in order to collect information on both the conquest and the Inca world, with the clear intent of writing the first major history of Peru. When he returned to Spain in 1550, he managed to publish only the first part of his work...a thorough description of the land and people of Peru. It includes both the cities founded by the Spaniards, such as Lima and Quito, and the first documented descriptions of Inca cities and their customs. His wealth of information is the result of personal observation, the scrutiny of reports and official papers, and oral reports from Quechua Indians" (Delgado-Gomez). Considered the earliest history of the entire viceroyalty of Peru, La Chronica... is illustrated with numerous woodcuts, several of which appear multiple times. In addition images of building activities, possibly derived from earlier works on European architecture and monuments, the illustrations include images of the devil, indigenous animals, the former Inca capital of Cuzco, Lake Titicaca, and Potosí. "A European vision of America sometimes enhanced by fantastic elements. In one of them, the devil, believed to be hard at work in the New World, is shown as he keeps the inhabitants from leading a virtuous Christian life, and in another, Lake Titicaca, located on the desolate Andean altiplano, looks curiously like a canal in the city of Venice. The illustration of the Cerro de Potosí, the fabled "silver mountain" of the Indies is an exception. Because it was based on an original drawing done by the chronicler himself, it more accurately depicts the real place" (Johnson).