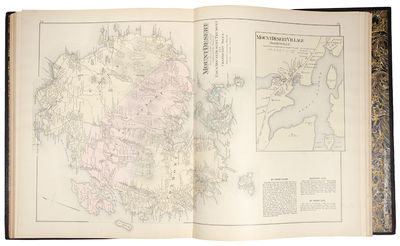 In 1881 cartographer/surveyor George N. Colby, assisted by J.H. Stuart and others, published the first atlas of Hancock County towns, villages, plantations and timber lots. The maps identify many property owners by name, and show the locations of homesteads, businesses, roads, schools, churches, mills and cemeteries in those plantations, towns and villages. Including all the insets, 87 maps were produced by Colby Halfpenny and Stuart, drawn on stone by William Bracher and printed by F. Bourquin of Philadelphia. The detailed town plans include Mount Desert Island, Bar Harbor, Ellsworth, Bluehill, Southwest Harbor, and numerous others. As with most 19th century county atlases, the work was published strictly by subscription. Given the relatively small size of the county in terms of population, the atlas would not have been published in a large print run, resulting in its rarity today. "Despite their limitations and inaccuracies, nineteenth-century county atlases nonetheless preserve a detailed cartographical, biographical, and pictorial record of a large segment of rural America in the Victorian age" (Ristow, American Maps and Mapmakers, p. 424). This copy with provenance to Edward C. Burleigh, the Governor of Maine from 1889-1893.