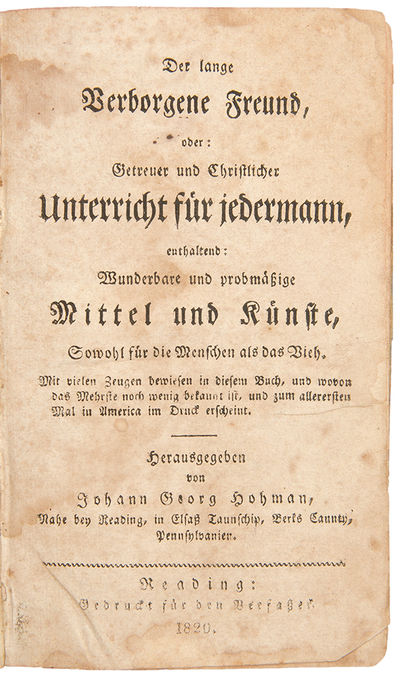 by HOHMAN, Johann Georg
Reading, PA: Gedrucht fur den Verfasser" [printed by Carl Augustus Bruckman], 1820. 12mo. (6 7/8 x 4 1/8 inches). 100pp. (Browning, minor loss to lower corners of B1 and B2). Contemporary half sheep and hand-coloured patterned paper covered boards (minor loss to paper of upper cover) A legendary work of Pennsylvania German folk magic and remedies, in its exceedingly rare first edition. This work (probably based on earlier works of folk magic in the European tradition such as the various works attributed to Albertus Magnus), was reprinted many times and became closely associated with the Pennsylvania Dutch magic tradition known as Braucherei. Often referred to as the "pow- wow book" in translation (indeed, still in print today), it is a work of broad appeal, as so many of the spells, recipes and remedies are universally applicable to rural concerns, especially those pertaining to both human and animal health. The supposedly occult powers of the book figure in works of fiction as well. Unsurprisingly, this first edition is rare, for all editions saw heavy use. Three copies are located in OCLC; of these, only one copy is located in North America (American Antiquarian Society). Austin 922; Shaw & Shoemaker 1642; Boette & Tannhof 2462. (Inventory #: 30470)
$4,000.00 add to cart or Buy Direct from
Donald A. Heald Rare Books
Share this item
Donald A. Heald Rare Books
Offered by

by [ALBUM OF BLANK PAPER IN RED MOROCCO BINDING]