Views on the West Coast of America 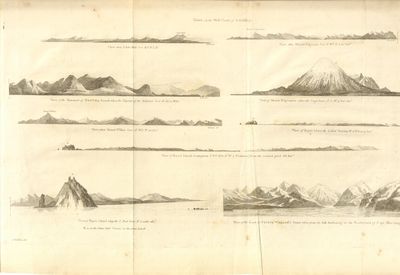 by Webber, J.
London: G. Nicol and T. Cadell. Good. Map. Circa 1785. Image cropped due to scanner size. Two fold lines, foxing, corner creasing, and chips along edges with small tears where it was extracted. Some offsetting of images from folding. Page 86 from "Voyage to the Pacific Ocean, undertaken by the Command of His Majesty, for making discoveries in the Northern Hemisphere. Performed under the direction of Captains Cook, Clerke and Gore, in His Majesty's ships the Resolution and Discovery, in the years 1776, 1777, 1778, 1779 and 1780." Nine views compiled from Captain Cook's expeditions, including Prince William's Sound, Mt. St. Elias, and Mt. Edgecumbe in Alaska. ; 11 3/4" x 19" . (Inventory #: 009900)
$70.00 add to cart Available from
Back of Beyond Books
Share this item

Lancers for the King - A Study of the Frontier Military System of Northern New Spain, with a Translation of the Royal Regulations of 1772

by Brinckerhoff, Sidney B. ; Faulk, Odie B.

Phoenix : Arizona Historical Foundation , 1965
(click for more details about Lancers for the King - A Study of the Frontier Military System of Northern New Spain, with a Translation of the Royal Regulations of 1772)

Tascosa - Its Life and Gaudy Times

Texas Tech University Press , 2007
(click for more details about Tascosa - Its Life and Gaudy Times)
View all from this seller>