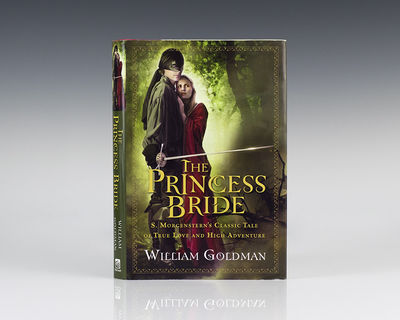 by Goldman, William
New York: Harcourt, Inc, 2007. First edition of the 35th Anniversary edition of this classic. Octavo, original cloth. Signed by William Goldman on the half-title page. Fine in a near fine dust jacket. Cover art by Larry Rostant. Ross MacDonald praised The Princess Bride as "[a] comic adventure romance which moves all over the world and dances through history...carried off with fantastic inventive energy and lightness, everything converted into pure story...The Princess Bride is a joyous and releasing book." "[Goldman's] swashbuckling fable is nutball funny...a 'classic' medieval melodrama that sounds like all the Saturday serials you ever saw feverishly reworked by the Marx Brothers," said Newsweek. Basis for the 1987 film directed and co-produced by Rob Reiner, and starring Cary Elwes, Robin Wright, Mandy Patinkin, Chris Sarandon, Wallace Shawn, Andre the Giant and Christopher Guest. (Inventory #: 5851)
$1,500.00 add to cart or Buy Direct from
Raptis Rare Books
Share this item