Yachting and Seafaring Scrapbook Album, with a Few Original Drawings as well as Poetry, Stories and Clippings 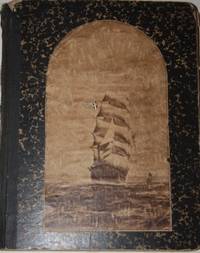 by Schnur, Frederick W.
1932, 1933. Hardcover. Cloth spine. Good. 8vo. 24.5 by 19 cm. Unpaginated, over 120 pages with some content (a few pages have meagre content, so a firm count is elusive). The album scrapbook we believe was compiled by the son of an illustrator for "Rudder Magazine", active in the 1930s. The bookplate of the professional artist, M. A. Schnur, is pasted onto the inside front cover, while some work within is signed F. W. Schnur. This is also the kind of compilation one would expect from a growing child, enthralled by a parental passion, and encouraged probably by the parent. It is not the kind of thing a grown adult with an active artistic commitment to have directed his energies to create. It would appear that Frederick Schnur later became a boat broker, thus turning a childhood passion into a related career. Of the verse, most are poems written by well-known writers such as John Masefield, Oliver Wendell Holmes and Walter de la Mare, but Frederick Schnur has original pieces as well, and some contributions from unknown names might be friends of his, perhaps members of a club. All written out in a neat, if unremarkable hand. There are two pencil drawings of sailboats, a watercolored moonlit calm seascape and a few small vignettes. Most of the artwork is cutout from magazines (Rudder, Yachting, etc.), with some articles also cut-out. The album itself is a typical black marbled school notebook -- the kind one still encounters -- with lined paper within. The book was carefully and meticulously compiled, albeit there is an undeniable scrappiness to the finished product, which is not without charm in itself. (Inventory #: 004641)
$125.00 add to cart Available from
White Fox Rare Books & Antiques
Share this item
White Fox Rare Books and Antiques
Offered by