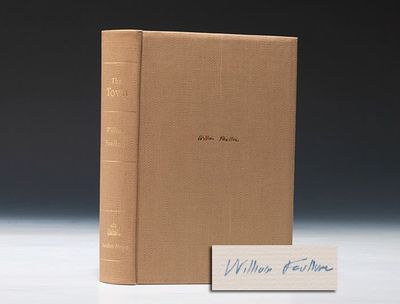 by FAULKNER William
1957. First Edition . Signed. FAULKNER, William. The Town. New York: Random House, (1957). Octavo, original tan cloth, original acetate dust jacket. Housed in a custom slipcase. $3000.Signed limited first edition, number 227 of 450 copies signed by Faulkner.The second novel in Faulkner’s celebrated Snopes trilogy—which began with The Hamlet (1940) and ended with The Mansion (1959)—emerges as a study in contrast: while there are “lots of narrative eddies, many of them swirling with good humor,” passages such as Eula’s suicide are “wrenching, and one understands why the author told Jean Stein that he had been reduced to tears while writing it. He was saying good-bye to his fantasies” (Parini, 394-96). While the book received many negative reviews, “reviewers in the main missed… the grandeur of the scheme, the size of the enterprise, the attempt… to write the epic not only of Yoknapatawpha but of the South… [Faulkner] had not completely forsaken the adventurousness of his earlier work” (Karl, 959). Front flyleaf (blank) excised. Brodsky 382. Petersen A47.1a. Bookseller label of renowned mid-20th-century New York rare bookseller Philip C. Duschnes on rear pastedown.Fine condition. (Inventory #: 90790)
$3,000.00 add to cart Available from
Bauman Rare Books
Share this item