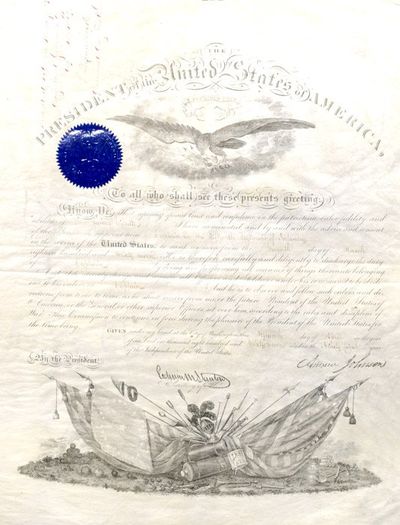 by JOHNSON Andrew STANTON Edwin
1867. Signed. JOHNSON, Andrew and STANTON, Edwin. Document signed with stamped signatures (Military Commission). Washington, D.C.: April 15, 1867. Folio, single engraved sheet of vellum (16 by 19-1/2 inches), finished in manuscript. $1800.Fine military commission, fully engraved on vellum and finished in manuscript, appointing James Gillette as captain in the 15th Regiment of Infantry, with the official stamped signatures of both President Andrew Johnson and Secretary of War Edwin M. Stanton.The 15th Regiment of Infantry was activated during the Civil War on May 3, 1861. By the end of the war, the regiment had fought in 22 major engagements, including Chattanooga, Chickamauga, Murfreesboro, and Atlanta as a part of Brigadier General John King’s Army regulars of Johnston’s Division, 14th Army Corps of the Army of the Cumberland. “The Regiment was a key element of the only Regular Brigade in Sherman’s Army” (H.R. Brinkerhoff). Captain and Brevet Lieutenant Colonel James Gillette served as Commissary of Subsistence of the Western District of Mississippi and the Post of Vicksburgh. He was appointed Brevet Major in 1869. “Edwin Stanton was one of the central political figures of the Civil War era and one of the most controversial. His principal role was as chief manager under the president of the Union war effort… and his immense energy and organizational talent made possible the mobilization of the North’s vast resources to achieve victory… Stanton’s strongest commitment was to preserve the Union, and his tenacious efforts during the early stages of Reconstruction to sustain the army and reverse President Johnson’s policy of leniency toward the former Confederates did much to redeem the sacrifices of the war” (ANB). Docketed by the Assistant Adjutant General, E.D. Townsend (with the marginal annotation, in another hand, “Recorded Volume 18, page 278, Adjutant General’s Office, April 15, 1867”). With large ornamental vignettes of the American Eagle at top and military flags and regalia at bottom. Embossed paper seal affixed. Fine condition, with only a few minor spots. (Inventory #: 83644)
$1,800.00 add to cart Available from
Bauman Rare Books
Share this item