Mathematical Investigations in the Theory of Value and Prices 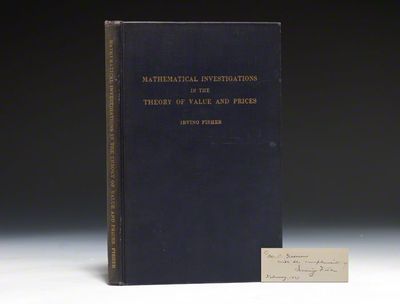 by FISHER Irving
1926. Signed. FISHER, Irving. Mathematical Investigations in the Theory of Value and Prices. New Haven: Yale University Press, 1926. Octavo, original navy cloth. Housed in a custom clamshell box. $5500.Photo-engraved later printing of Irving Fisher’s groundbreaking doctoral dissertation at Yale, presentation/association copy, with numerous diagrams for the design of a hydraulic mechanism demonstrating equilibrium prices in a multi-market economy, inscribed to a famous economist: “To Mr. O. Gressens with the compliments of Irving Fisher. February, 1927.”While a graduate student at Yale, Fisher ""studied mathematics under Josiah Willard Gibbs and political economy with William Graham Sumner. When the time came for a doctoral dissertation, Sumner suggested he combine the two fields, and this was how Fisher came to write one of the earliest works of mathematical economics by an American. The dissertation was published in 1892 in the Transactions of the Connecticut Academy of Arts and Sciences and rapidly won him an international reputation… Fisher's economic research was marked above all by an ideal of quantification. Political economy, as the discipline had traditionally been known, underwent an important theoretical change in the 1870s and 1880s. The new neoclassical theory identified value with utility, or more precisely with the utility of the last increment of a product consumed. Because utility was defined 'at the margin,' this increment could be regarded mathematically as a derivative. That is, the new marginal utility theory permitted the calculus to enter economics as the fundamental basis of theory. This was why Sumner could recommend that Fisher join his study of political economy to that of mathematics. He relied for his dissertation mainly on books by the British economist William Stanley Jevons and by two Germans, Rudolf Auspitz and Richard Lieben"" (ANB). Although Fisher was unaware of Walras's Éléments dÉconomie politique pure (1874) prior to this thesis, he acknowledged the priority of that work on equations of general equilibrium in his preface, as well as the importance of Edgeworth's Mathematical Psychics on the subject of utility surfaces. It is generally agreed that ""although only a student, Fisher had independently developed a theory of general economic equilibrium that was identical to part of Walras's and included the concept of indifference surface, one of the fundamental bases of modern economic theory"" (IESS V:477).In his dissertation, Fisher delineates the machine he constructed, a ""hydraulic-mechanical analogue model of a general equilibrium system, replete with cisterns, valves, levers, balances and camps. Thus could he display physically how a shock to demand or supply in one of ten interrelated markets altered prices and quantities in all markets and changes the incomes and consumption bundles on the various consumers. The model is described in detail in the book; unfortunately both the original model and a second one constructed in 1925 have been lost to posterity"" (The New Palgrave II). Fisher continued at Yale as a distinguished and popular professor until his retirement in 1935. His ""impatience and opportunity"" theory on interest was introduced in The Rate of Interest (1907), later revised and enlarged by him in The Theory of Interest (1930). Other major works include: The Purchasing Power of Money (1911), and the monumental The Making of Index Numbers (1922). Joseph Schumpeter ""predicted in 1948 that Irving Fisher's 'name will stand in history principally as this country's greatest scientific economist"" (ANB). The first edition of this work was published in the Transactions of the Connecticut Academy of Arts and Sciences in 1892 and subsequently went out of print. This photo-engraved reprint edition was published in 1925 in respond to demand; this is the second printing of that edition. This presentation/association copy is inscribed to statistician/economist Otto Gressens. Gressens wrote ""On the Measurement of Seasonal Variations"" (Journal of the American Statistical Association, June 1926, pp. 203-10), as well as ""The Validity of Correlation in Time Sequences and a New Coefficient of Similarity"" (with E.D. Mouzon, Jr., ibid, Dec. 1927, pp. 483-92). The latter gave birth to a widely used concept known as the Gressen and Mouzons Coefficient.Only slightest rubbing and soiling to cloth. A most desirable inscribed presentation/association copy in near-fine condition. (Inventory #: 80567)
$5,500.00 add to cart Available from
Bauman Rare Books
Share this item