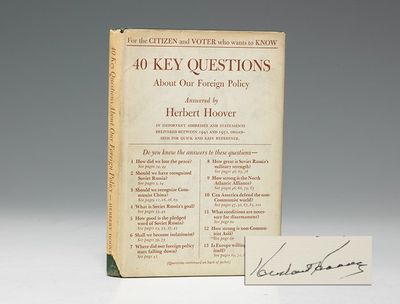 by HOOVER Herbert
1952. First Edition . Signed. HOOVER, Herbert. 40 Key Questions About Our Foreign Police Answered by Herbert Hoover. Scarsdale, New York: Updegraff, (1952). Octavo, original green cloth, original dust jacket. $2200.First edition of Hoover's 1952 collection of speeches and correspondence on the ""Great Debate"" and the perils of communism, signed on the half title by President Hoover, in scarce dust jacket.This timely volume assembles printings of major speeches and select correspondence by Hoover on the threat of world communism, including his June 29, 1941 address, ""A Call to American Reason""; correspondence on the United Nations and China; his April 27, 1950 speech, ""The Voice of World Experience""; his July 11, 1950 address, ""World Peace and the United Nations""; his October 19, 1950 address, ""Where Are We Now?""; his November 1, 1950 address, ""When Disarmament Can Come"" and his December 20, 1950 address, ""Our National Policies In This Crisis,"" which Hoover regarded ""as one of the most important speeches of his career."" Also featuring Hoover's February 27, 1951 statement before the Senate Committee on Foreign Relations and Armed Services, ""Defense of Europe""; his January 27, 1952 address, ""The Year Since the Great Debate,"" which had been ignited by the opposition of Hoover and others to Truman's policy on U.S. army divisions to Europe, and Hoover's October 19 speech that traces ""the course of American relations with the Soviet Union from the time America 'first entered this swamp of lost statesmanship'"" (Best, Herbert Hoover, 342, 339). Containing first revised edition of ""A Call to American Reason"": an unrevised version was included in Hoover's Addresses upon the American Road, 1940-41 (1941). Neither the version in Addresses nor this version in 40 Key Questions ""precisely matches the speech as delivered"" (Nash, Freedom Betrayed). Book fine; light toning to spine with slight chipping to spine ends and rear panel affecting several letters of extremely good dust jacket. (Inventory #: 101138)
$2,200.00 add to cart Available from
Bauman Rare Books
Share this item