Requiem for a Nun 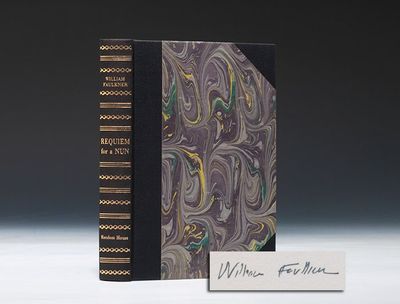 by FAULKNER William
1951. First Edition . Signed. FAULKNER, William. Requiem For A Nun. New York: Random House, (1951). Octavo, original three-quarter black cloth gilt, marbled boards, original acetate dust jacket. $2800.Signed limited first edition, number 246 of only 750 copies signed by Faulkner.In this sequel to Sanctuary, Faulkner combined fictional and dramatic techniques. “On one level Requiem For A Nun would follow Temple Drake’s destiny; on another it would be a study in crime and punishment; on still another it would ring in the vast processes of geological and historical change” (Blotner, 542). Faulkner himself favorably described the work as “a little on the esoteric side, like As I Lay Dying” (Karl, 495). Petersen A32.1a. See Brodsky 302. Fine condition. (Inventory #: 90792)
$2,800.00 add to cart Available from
Bauman Rare Books
Share this item