Address on the Race Prejudice and Intellectual Dishonesty of Woodrow Wilson 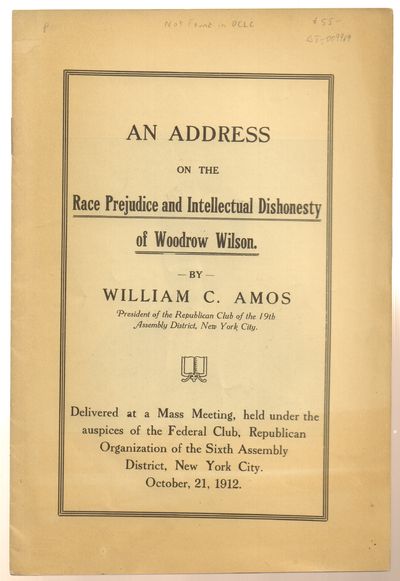 by Amos, William C
New York City. Very Good. 1912. First Edition. Softcover. Stapled softcovered pamphlet issued without wraps. Pages toned with light soiling. Chipping on foredge. Speech by the President of Republican Club of the 19th Assembly District, New York City, delivered at a mass messting held under the auspices of the Federal Club, Republican Organization of the Sixth Assembly District, New York City, October 21, 1912. At the time, Wilson was the Democratic nominee for president. Not found in OCLC. ; 8vo 8" - 9" tall; 13 pp . (Inventory #: 009969bt)
$55.00 add to cart Available from
Back of Beyond Books
Share this item