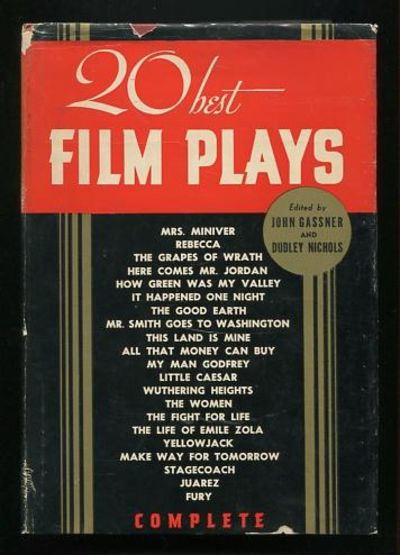 by Gassner, John, and Dudley Nichols, eds.
New York: Crown Publishers Inc.. Very Good+ in Very Good dj. (c.1943). First Edition. Hardcover. [nice clean book, light shelfwear, rear hinge a little weak; the jacket shows a bit of wear at edges and corners, minor paper loss at top of spine, tiny chip at top of front panel, slightly larger (but still small) chip in top edge of rear panel]. The editors' judgment was pretty good -- a large proportion of the films whose screenplays were selected for inclusion in this big fat volume (1112 pages) have stood the test of time very well indeed. Contains the scripts for IT HAPPENED ONE NIGHT; THE WOMEN; MY MAN GODFREY; HERE COMES MR. JORDAN; REBECCA; WUTHERING HEIGHTS; THE GRAPES OF WRATH; HOW GREEN WAS MY VALLEY; MAKE WAY FOR TOMORROW; LITTLE CAESAR; FURY; MR. SMITH GOES TO WASHINGTON; THE LIFE OF EMILE ZOLA; JUAREZ; MRS. MINIVER; THIS LAND IS MINE; THE GOOD EARTH; ALL THAT MONEY CAN BUY; STAGECOACH; YELLOW JACK; THE FIGHT FOR LIFE. Both editors have contributed introductory essays, on "The Screenplay as Literature " (Gassner) and "The Writer and the Film" ( Nichols). The scripts have been somewhat adapted, in an interesting way: rather than being presented strictly in what we think of today as screenplay format, the action (i.e. non-dialogue) portions have been rendered into a kind of semi-novelistic prose (although maintaining the present progressive tense that's so peculiar to screenwriting, e.g. "Joe looks up at the cop, defiance in his eyes."); the effect, for the reader, is very much like having someone narrate the action and dialogue of the movie as it unfolds on the screen (including, often, descriptions of individual shots and editing cuts). Each script is prefaced by a page giving basic production and cast credits for the film. . (Inventory #: 22045)
$100.00 add to cart Available from ReadInk
Share this item
ReadInk
Offered by

New York : Carrick & Evans, Inc. , (c.1940)
(click for more details about Murder Without Clues)
View all from this seller>