Collection of Seven Typed Letters and or Postcards, Signed 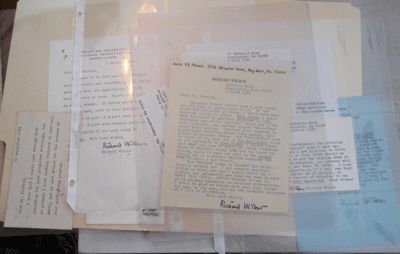 by Wilbur, Richard
Various: Privately Printed. First edition. Loose Sheets. Very Good +. Sold here together are seven typed pieces or correspondence from poet Richard Wilbur to teacher and small press publisher William Plumley. Plumley ended up publishing at least one broadside poem of Wilbur's as part of his Parchment Gallery Press series of publications at the University of Charleston. The correspondence includes the following: (1) Postcard dated 22 September 1969, five lines, signed in full. Wilbur writes to say he has nothing finished at the moment to contribute to a Plumley proposed project. (2) Typed letter on Wesleyan University stationary dated 2 October 1969. Envelope included. Signed in full. 10 lines. A short. letter discussing poetry's meaning. (3) Typed letter written on Wilbur's own stationary dated 8 March 1983 from his Cummington, MA address. Signed in full. 26 lines. Detailed discussion of possible poems to be used for a Plumly project. (4) Typed postcard dated 18 July 1997 from Cummington, MA. Signed in full. 10 lines. Various projects and details discussed in brief. (5) Typed postcard dated 2 June 1998 from Cummington, MA. Signed in full. 8 lines. Mentions the discontinuation of Plumley's "lively limited-edition project". (6) Typed postcard dated 18 October 1996. Signed in full. 12 lines. Discusses details of the finalization of Wilbur's poem entitled More Opposites that Plumly published. and, (7) Typed letter dated 5 October 1996. Signed in full. 15 lines. Wilbur mentions that he has signed some Washington Post photographs along with a poem to be submitted to Plumley for possible publication. Condition of these documents are all very good or better with some doodles on one piece. (Inventory #: 22001)
$500.00 add to cart or Buy Direct from Derringer Books
Share this item
Derringer Books
Offered by