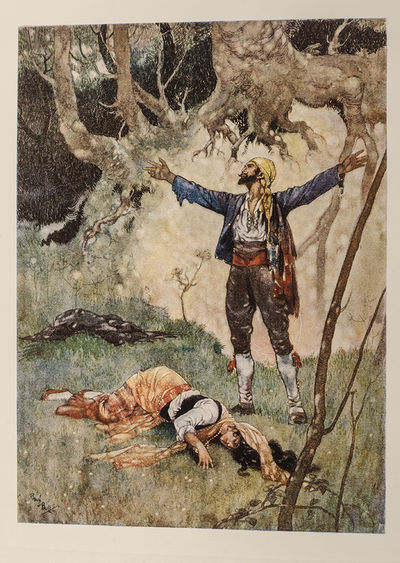 Rene Bull's vibrant illustrations perfectly capture the intense drama of love and jealousy in Prosper Mérimée's tale which was the basis for Georges Bizet's opera of the same title.

René Bull (d. 1942) "was born in Ireland and went to Paris to study engineering, but left this for art work in London, 1892. After working for various magazines, he was appointed ‘special' for Black and White, 1896, attending the Armenian massacres and the Graeco-Turkish War as artist...He served in the First World War in RNVR, 1916, and RAF, 1917. Bull was one of the most versatile specials because his stature as an artist was above average. Not only an accurate reporter, he was a talented comic draughtsman and a brilliant illustrator of fairy stories" (Houfe, The Dictionary of 19th Century British Book Illustrators, p. 81). Works illustrated by Bull include: La Fontaine's Fables (1905), Uncle Remus, by Joel Chandler Harris (1906), The Arabian Nights (1912), The Russian Ballet by A.E. Johnson (1913), Rubáiyát of Omar Khayyám (1913), Carmen, by Prosper Mérimée (1916), and Travels into Several Remote Nations of the World, by Jonathan Swift (1928). (Inventory #: 03527)
$250.00 add to cart or Buy Direct from
David Brass Rare Books
Share this item

Noble & Joyous Boke Entytled Le Morte Darthur, The. Notwythstondyng it treateth of the byrth lyf and actes of the sayd Kynge Arthur: of his noble knyghtes of the Rounde Table, theyr merveyllous enquestes & adventures

Oxford: Printed at the Shakespeare Head Press..., 1933
(click for more details about Noble & Joyous Boke Entytled Le Morte Darthur, The. Notwythstondyng it treateth of the byrth lyf and actes of the sayd Kynge Arthur: of his noble knyghtes of the Rounde Table, theyr merveyllous enquestes & adventures)

Edinburgh: Printed by James Ballantyne, 1809
(click for more details about Seasons, The)
View all from this seller>