Rational arguments on the nature of true pathology; which, it is presumed, prove the absurdity of dissections, and the use of poisons.. 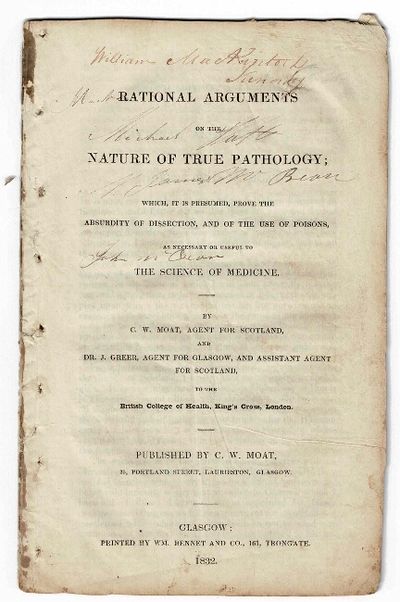 by Moat, C[rofton] W[illiam]
Glasgow: printed by Wm. Bennet and Co, 1832. Second edition, 10,000 copies, 8vo, pp. 52; removed from binding; very good. No copy of this second edition, with four more pages than the first, is located in OCLC. The entire text seems to have been reset. Crofton William Moat's career begins with the activities of one of the most famous and influential quacks (or quasi-physicians) of the 19th century, James Morison (1770-1840). It was Morison who invented and promoted the "Universal Vegetable Pills", often called simply "Morison's Pills", as a medicine which purportedly brought about a vast boost to health. These pills were popular for a great deal of the nineteenth century, in Britain and abroad. Morison created the British College of Health, of which Morison himself became President and a man named Thomas Moat became Vice-President. James Morison and Thomas Moat were partners in the manufacture and sale of medicinal pills for some years. Thomas Moat's health went into decline, however, and his son, Crofton William Moat, took on considerable responsibility in the concern. Thomas Moat died in August 1835. In the mid to late 1830s, his son Crofton William Moat would be a partner with the Morisons in the production and promotion of "Morison's Universal Medicine," with the firm itself being called "Morison, Moat, & Co.", and the work being largely centred at the British College of Health in London. James Morison himself died in 1840, and it was in the early 1850s that there arose an intense legal dispute between representatives of the two families, the Morisons and the Moats, over the right to manufacture and promote the pills. The London periodical The Jurist, Vol. XV, Part I, 1852, has an elaborate account of the court case (Morison v. Moat from the year 1851) and its back story, on pp. 787-797. (Inventory #: 48455)
$201.25 add to cart or Buy Direct from
Rulon-Miller Books
Share this item