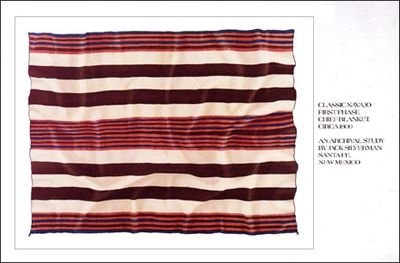 by Silverman, Jack
New. 1984. Poster. "During the first half of the 19th century, the Navajo traded extensively with other Native American tribes. Demand for Navajo blankets was especially strong among the Plains tribes, notably among the Arapaho, the Cheyenne and the Sioux. At that time, the Plains tribes were settled east of the Rocky Mountains and west of the Mississippi and Missouri valleys, in villages and encampments surrounded by landscapes of rolling hills, flat horizons and endless skies. The first phase chief's blanket, characterized by its composition of horizontal, parallel stripes, was a familiar trade item among the Plains people. First phase chief's blankets were expensive, commanding a barter price of fifty horses; one hundred buffalo hides, ten rifles or three ounces of gold. The term "chief's blanket" came into the vernacular because only the highest ranking members of the Plains tribes—the chiefs—could afford to trade into such a valuable garment. To this day, the first phase chief's blanket remains among the most desirable of all American Indian works of art." - Joshua Baer. Poster images in the Silverman Museum Collection reflect the careful attention to detail by Jack Silverman. The imagery is first executed in serigraph form in 65 to 100 screen applications on Arches handmade paper. After satisfying his critical eye, Jack supervises the printing of the art reproductions in poster form on high quality, acid-free archival paper. Each poster is reproduced in six to twelve press runs on Curtis Brightwater cover stock in a consistent format with the others in the series. These posters then become not only strikingly colorful art pieces, but also a careful documentation of the human spirit that gave life to these beautiful, functional garments. ; 24" x 36" . (Inventory #: 010002sil)
$10.00 add to cart Available from
Back of Beyond Books
Share this item