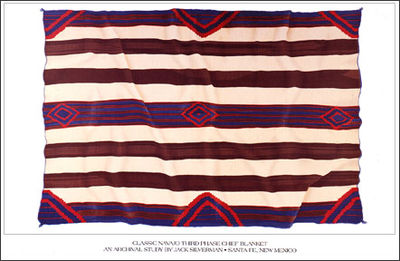 by Silverman, Jack
New. 1984. Poster. "During the second half of the 19th century, the primary market for Navajo blankets shifted from other Native American tribes to Anglo-Americans. While Native Americans had preferred Navajo Blankets featuring simple arrangements of horizontal stripes, Anglo Americans found the relative simplicity of first and second phase chief's blankets uninspiring, Anglo Americans also preferred bordered compositions to unbordered compositions, probably because most Oriental carpets featured bordered compositions. In response to the Anglo American preferences, Navajo weavers introduced the concentric diamond to their chief's blankets. The chief's blanket's traditional, horizontally striped field was decorated by the arrangement of a full central diamond surrounded by eight partial diamonds. This gave the chief's blanket a focal point, and the suggestion of a border. Almost overnight, the diamond pattern (or “third phase" pattern, as it is more commonly known) became extremely popular among Anglo American tourists, settlers, military personnel and merchants throughout the Americana west. In this superb example, the bold design and restrained size of the diamonds strikes an elegant balance with the striped field. The result is an icon of the 19th century Navajo weaving." - Joshua Baer. Poster images in the Silverman Museum Collection reflect the careful attention to detail by Jack Silverman. The imagery is first executed in serigraph form in 65 to 100 screen applications on Arches handmade paper. After satisfying his critical eye, Jack supervises the printing of the art reproductions in poster form on high quality, acid-free archival paper. Each poster is reproduced in six to twelve press runs on Curtis Brightwater cover stock in a consistent format with the others in the series. These posters then become not only strikingly colorful art pieces, but also a careful documentation of the human spirit that gave life to these beautiful, functional garments. ; 24" x 36" . (Inventory #: 010000sil)
$10.00 add to cart Available from
Back of Beyond Books
Share this item

Letter by a Private in the Union Army, Harrison's Landing, Virginia


(click for more details about Letter by a Private in the Union Army, Harrison's Landing, Virginia)
View all from this seller>