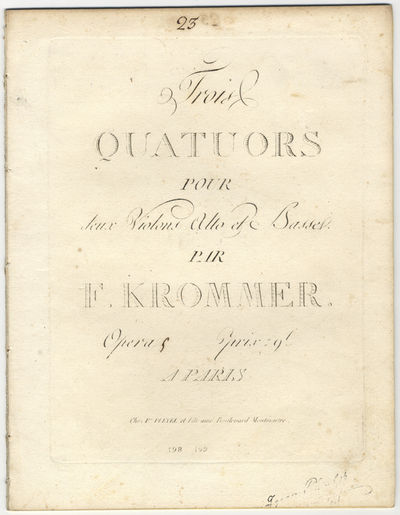 Numbers "23, "24," and "25" in manuscript as a header to all pages, to each of the three quartets respectively. Notational corrections tin pencil to final pages of Violino secondo and Violoncello parts; measure numbers added in pencil in a modern hand throughout.

Minimally foxed and slightly soiled; paper repair to pp. 5-6 of Violoncello part. A very good copy overall. A later edition, later issue. RISM K2617 (3 copies only in the U.S., at Cornell, Oberlin, and the University of California, Berkeley, not distinguishing among issues). The plate number points to 1799, but the imprint suggests a much later date: the address became effective in 1816 and the spelling "Ice. Pleyel" only in 1828 (see Devriès-Lesure I, p. 129). The first edition was published by Gombart in Augsburg in March 1796; according to Matthäus, André (p. 311), the present edition is "probably" based on Gombart's.

The second publisher's number to the title refers to Pleyel's edition of Krommer's op. 3.

"Krommer was one of the most successful of the many influential Czech composers in Vienna at the turn of the 18th century. His creative output comprises over 300 works... Krommer's reputation is attested by the rapid spread of his compositions in reprints and arrangements by German, Danish, French, English, Italian and American publishers... He was regarded (with Haydn) as the leading composer of string quartets, and as a serious rival of Beethoven... His modes of expression extend from the galant style of the earlier 18th century to Romanticism." Othmar Wessely in Grove Music Online. (Inventory #: 25732)
$165.00 add to cart or Buy Direct from
J. & J. Lubrano Music Antiquarians
Share this item