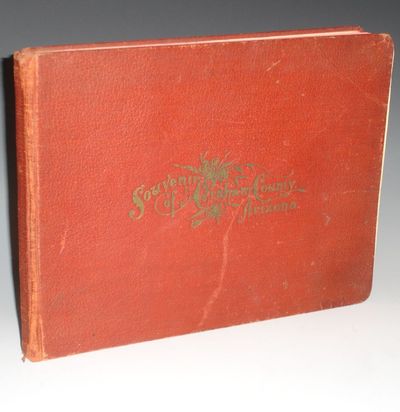 by Segal, A.N.
Rochester, New York, nd. (ca.1900): Vredenburg & Co. Oblong Quarto. 100 leaves, all illustrations (138 images). This work which is the largest early photographic editon of Graham County and includes photographs of smelters, factories, copper mining, drug stores, railroad stations, landscapes, libraries, small businesses as well as school buildings. While more than half are devoted to mining, it has many pictures of locations in Graham County which have appeared nowhere else. Two smaller editions were done by newspaper publishes with 30 to 50 pages with mostly text. Here the printing was done by the Electric City Engraving Company of Buffalo which had pioneered Illustrated with half tones by Simon Werner. As is the case with the earliest Arizona Territorial Books, the printing processes for better illustrations were either done in San Francisco or in New York. Bound in brown cloth lettered and decorated in gilt. Inner hinges cracked but holding quite well, lacks rear free endpapers. Rare in very good condition, most copies with serious defects and often missing plates. (Inventory #: 018766)
$1,050.00 add to cart or Buy Direct from
ALCUIN BOOKS, ABAA
Share this item

Trophy Hunter in Africa, Limited to 1,000 Copies, Signed By the Author and Jim Rikhoff

The Circus of Dr. Lao, (Signed by the Artist Boris Artzbasheff)

New York : The Viking Press , 1935
(click for more details about The Circus of Dr. Lao, (Signed by the Artist Boris Artzbasheff))
View all from this seller>