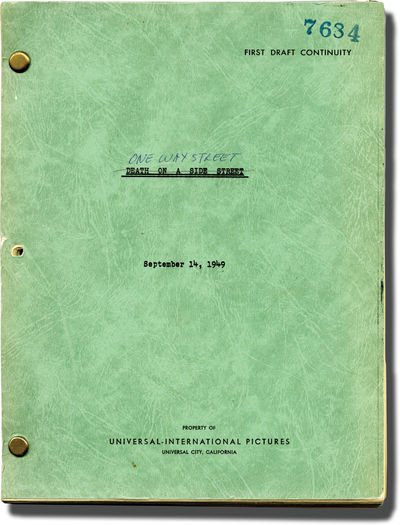 by Hugo Fregonese (director); Lawrence Kimble (screenwriter); James Mason, Marta Toren, Dan Duryea, Basil Ruysdael (starring)
Universal City, CA: Universal Pictures, 1949. Revised First Continuity script for the 1950 film noir, here under the film's working title, "Death on a Side Street." That title has been struck through in pencil, with the film's final title, "One Way Street," written just above it. Copy belonging to studio secretary Marion Pecht, with her name in holograph pencil on a second title page. Brief annotations throughout in holograph pencil.

In this key film noir, James Mason reprises in spirit his role from the British film noir, "Odd Man Out," made three years before, as a criminal who steals from the mob and is forced to go on the lam, with mob boss Dan Duryea in no mood for forgiveness.

The first American film to be directed by Argentinian import Hugo Fregonese. The AFI Catalog notes that Mexican Vice Consul Ernesto Romero acted as technical advisor, and according to studio production notes, an entire Mexican village was built on the Universal-International lot. Rodolfo Acosta, Emma Roldan and Margarito Luna were all Mexican actors. Finally, popular character actor James Best made his debut in "One-Way Street," appearing briefly in an uncredited role as a "Driver."

Green titled wrappers, noted as FIRST DRAFT CONTINUITY on the front wrapper, rubber-stamped production No. 7684, dated September 14, 1949. Title page present, noted as REVISED FIRST DRAFT, with a credit for screenwriter Kimble. 137 leaves, with last page numbered 95. Mimeograph on yellow stock, dated variously between 9/6/49 and 10/4/49, with blue and yellow revision pages throughout, dated variously between 9/22/49 and 10/7/49 Pages and wrapper Near Fine, bound with two gold brads.