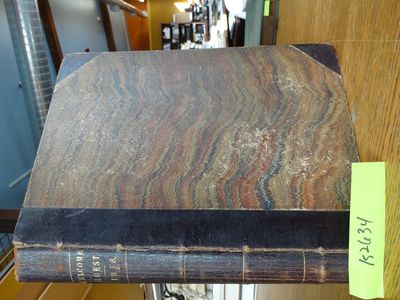 London: George Fall, 1859. Hardcover. G+ (Has moderate wear along binding edges and spine; outermost pages and flyleaves have instances of light foxing; rest of page edges have only a bit of aging, and only a few appear to have been smudged during printing.). Marbled paper boards with brown leather spine & corners, 624 total pp., many BW illus. The first full 39 issues of a British magazine that aimed at a wide readership for stories, memoirs, poetry, and nice engravings. Founded by Henry Vizetelly, the issues of Welcome Guest ran from May 1, 1858 until December 17, 1864. The issues here include the English version of Gustav Freytag's "Debit and Credit," in serial form. Also here as a serial is George Augustus Sala's "Twice Round the Clock." Sala is described as "the most picturesque essayist of the day" (along with an engraved portrait, p. 8, January 8, 1859 issue); and more stories from him appear, including "The Perfidy of Captain Slyboots" and "Make Your Game." Other stories are: H. Sutherland Edwards' "Ralph's Wedding," "The Prince de Blagueville's Boxer," and "The Foundling;" Benedict Cruiser's "How I Tamed Mrs. Cruiser" (serial); Georgiana S. Purdue's "The Old Maid's Story," the uncredited "Under a Cloud" (serial); John Lang's "Recollections of Botany Bay;" J. Crawford Wilson's "Fireside Tales;" and Alexandre Dumas' "The Fiddler Among the Bandits," among others. Includes poems by Robert Browning, Thomas Hood, Coventry Patmore, Adelaide Anne Proctor, Horace Smith, Thomas Miller, Robert B. Brough, Henry Wadsworth Longfellow, Bayard Taylor, Sheldon Chadwick, and more, with additional verses submitted by readers. Has biographical treatments of Benito Cellini, Rembrandt, and even Lola Montez. Some factual articles appear, with "The Influence of Gunpowder on Civilisation" as an example. The engravings are nice. A terrific find, and a scarce one, at that. (Inventory #: 152634)
$200.00 add to cart or Buy Direct from Mullen Books
Share this item