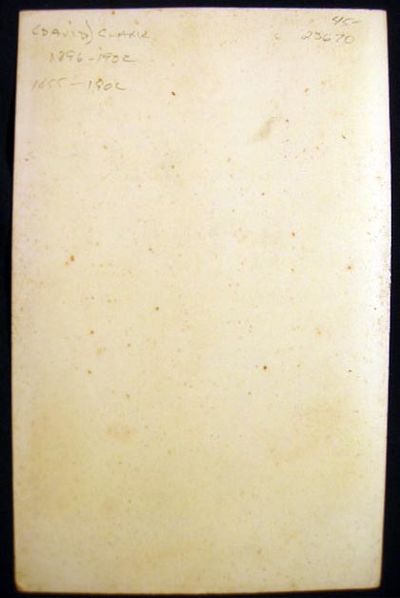 by (Americana - Photography - 19th Century - New Jersey - New Brunswick - D. Clark)
New Brunswick New Jersey: David Clark 355 George St. , 1892. Cabinet card portrait by 19th century New Jersey photographer David Clark (1825 - 1902). "…In 1852, Clark took over Vail's gallery on Peace Street, where he remained until relocating, probably in 1863, to King Block, Commerce Square. There he continued until 1891, at which time he moved to George Street. In 1851, Clark exhibited a few very fine daguerreotypes, including a highly praised portrait of a lady, at the first World's Fair at the Crystal Palace in London. At the New Jersey State Fair in 1857, he was awarded the prize for the best daguerreotypes in the state. Clark did a large portrait business, but he also did other kinds of work, including now rare stereographic views of New Brunswick. His career of fifty years spanned important developments in photographic technology, so his work is found in a variety of formats and techniques; the most commonly seen today are cartes-de-visite. Clark died in 1902; soon thereafter Isaac S. Van Derveer (1880-1975) was operating at Clark's last location and may have acquired his negatives. A collection of Van Derveer negatives, including a few that may be Clark's, are now at Special Collections, Rutgers University, New Brunswick…" (ref. 2010 Saretzky, Nineteenth Century New Jersey Photographers); photo is of a well-dressed & groomed young gentleman, sitter not named; approx. 4 1/4" x 6 1/2" overall size; front of mount card with the D. Clark imprint; light wear to mount; in very good condition.. Photograph. Not Bound. Very Good. (Inventory #: 23670)
$45.00 add to cart or Buy Direct from Certain Books
Share this item
Certain Books
Offered by

A Woman In the Case. A Story

New York, NY : Royal Arch Masons Ancient Chapter No. 1 , 1874
(click for more details about 1874 - 1887 Collection of Addresses and Chapter Membership Lists of the Ancient Chapter, No. 1, R.A.M. New York City)
View all from this seller>