Warner's Safe Dictionary Comprising over Five Thousand Words with Definitions and Pronunciations; Carefully Selected from Best Authorities and embracing All the More Difficult Words in General Use 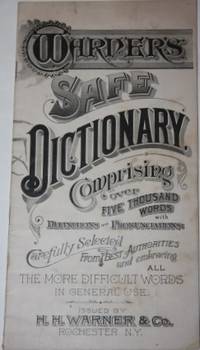 Rochester, New York: H. H. Warner & Co., 1889. First Edition. Wraps. Very Good. 4to. 29.5 by 15.5 cm. 32 pp. plus wraps. Versos are generally devoted to concise definition of words, and facing rectos are predominantly testimonials for the Warner & Co.'s various remedies. Inside cover features an illustration of a safe, as in a bank safe, which is meant as a metaphor for the company's "safe" cures. Warner had a diverse assortment of nostrums, including for kidney and liver, Bright's disease, female issues, malaria, and on and on. Elsewhere is a promotion for Warner's cookbook. A typical, if somewhat larger, pharmaceutical promotional flyer of the day, since these often included texts and illustrations not directly germane to the products being hawked but were coupled with the promotion to incentivize recipients to glance at the item, and possibly save it for a while. Moderate wear and soiling on the cover. Tiny dogear on lower corner of some leaves. Age toning to the leaves, as to be expected with the cheap paper stock employed. (Inventory #: 004651)
$125.00 add to cart Available from
White Fox Rare Books & Antiques
Share this item
White Fox Rare Books and Antiques
Offered by