Some account of the early part of the life of Elizabeth Ashbridge, who died, in the service of the truth, at the house of Robert Lecky, in the county of Carlow, Ireland, the 16th of 5th month, 1755 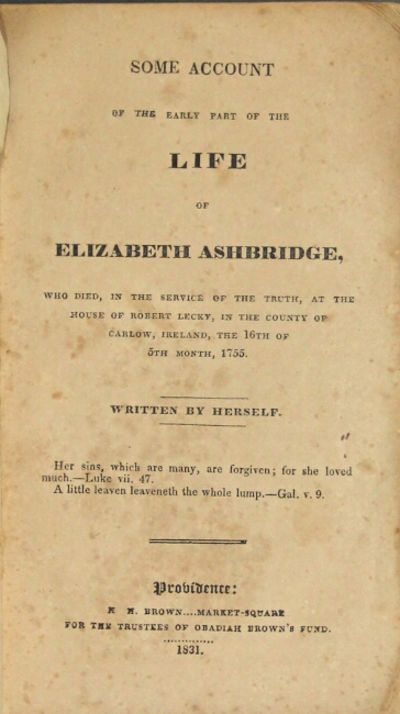 by Ashbridge, Elizabeth
Providence: H. H. Brown, for the Trustees of Obadiah Brown's Fund, 1831. 12mo, pp. 60; original drab front wrapper; some browning, very good. Preceded by several other editions between 1774 and 1820, this poignant autobiography chronicles the spiritual journey of an independent woman in a patriarchal world. Born in England in 1713, Elizabeth Ashbridge eloped at the age of 14, but within several months she was a widow. After her parents refused to take her in she went to Ireland to live with Quaker relatives. At the age of 19 she immigrated to the United States where she was indentured as a servant in New York. After two years she managed to purchase her freedom from a cruel master, then married a teacher named Sullivan who proved to be abusive. Disappointed that the Anglican ministry was closed to women, she tried other denominations, but became disenchanted with clerics indifferent to her aspirations. Visiting Quaker relatives in Pennsylvania, she converted. Her growing independence and secular life increasingly alienated her husband. After Sullivan's death, quickened by habitual drunkenness, she married Aaron Ashbridge, a respected Quaker from Chester Co., Pennsylvania. 48666 Elizabeth Ashbridge overcomes an authoritarian father, a cruel master, an abusive husband, and the hypocrisy of the priestly class. In her failed marriage and in her faith, Ashbridge chooses conscience over convention. Her story provides a unique perspective on the situation of women at the time of the Great Awakening. A thriving Quaker population in Rhode Island likely accounts for the publication of this edition, paid for by the Obadiah Brown Fund, which was founded in Providence in 1823 by bequest of Obadiah Brown "to be a fund, independent of New England Yearly Meeting, to enhance the Religious Society of Friends through grants to individuals and Friends organizations, and specifically for 'the printing and disseminating of useful books for the promulgation of the gospel and by that means, as well as, otherwise spreading our Religious Principals where they are little known'." Obadiah Brown was the son of Moses Brown, the founder of the Quaker School in Rhode Island (i.e. Moses Brown), and the nephew of John Brown, founder of Brown University. The original bequest from Brown was $100,000, said to be the largest single bequest to an institution of learning up to that time. The Obadiah Brown Fund exists to this day. This edition not in Smith, Friend's Books (see pp. 135-36); American Imprints 5802. (Inventory #: 48494)
$862.50 add to cart or Buy Direct from
rulon-miller books
Share this item