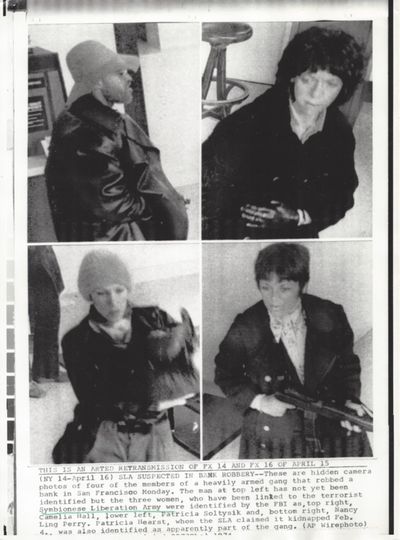 AP, 1974. Very Good. AP, 1974 Very Good [Symbionese Liberation Army] Wire Photo, SLA Suspected in Bank Robbery NP: Associated Press, April 16, 1974 Wire photo, 25 by 277 cm Very good, verso blank Caption reads: “SLA SUSPECTED IN BANK ROBBERY -- These are hidden camera photos of four of the members of a heavily armed gang that robbed a bank in San Francisco Monday The man at the top left has not yet been identified but the three women, who have been linked to the terrorist Symbionese Liberation Army were identified by the FBI as, top right, Camelia Hall, lower left, Patricia Soltysik and, bottom right, Nancy Ling Perry Patricia Hearst, whom the SLA claimed it kidnapped Feb 4, was also identified as apparently part of the gang” $3000 (Inventory #: 1544)
$30.00 add to cart Available from Bay Leaf Books
Share this item