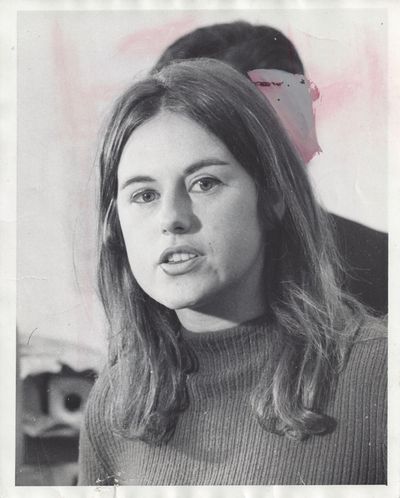 196801976. Very Good. 196801976 Very Good [Weathermen, SDS] Four Press and Wire Photos of Bernadine Dohrn (and Friends) A collection of four images of Bernadine Dohrn, who was involved with the Students for a Democratic Society and a leader of the Weather Underground, which landed her on the FBI’s 10 Most Wanted list She is married to fellow Weathermen Bill Ayers $11000Included are:NP: Associated Press, October 28, 1968 Wire photo, 205 by 253 Very good with heavy touch-ups; pencil notes and caption on verso Caption reads: “CHICAGO, Oct 28 -- DENOUNCE ‘HOAX OF ELECTIONS’ -- Bernadine Dohrn, left, national secretary of Students for a Democratic Society, and Eric Thor, right, Chicago regional organizer for SDS, announce the society’s plans for election day demonstrations ‘We do not believe that democracy is just going into a booth and pulling a lever,’ she said ‘We denounce the hoax of elections’”NP: Associated Press, June 23 1969 Wire photo, 205 by 253 cm Very good with date stamps and news clipping on verso Caption reads: “CHICAGO, June 23 -- FOR SOME, NEW TITLES -- These present and future officers of the Students for a Democratic Society are shown as they met with newsmen in Chicago today Bernadine Dohrn, top left, is outgoing interorganizational secretary Mike Klonsky, top right, is outgoing national secretary Mark Rudd, lower left, succeeds Klonsky as national secretary Jeff Jones, lower right, succeeds Dohrn as interorganizational secretary” The news clipping on the back, dated October 22, 1970 reports that Dohrn, a leader in the Weather Underground, is wanted by the FBI and has taken refuge in AlgeriaNP: No publisher, October 11, 1970 Press photo, 205 by 254 cm Very good with some touch-ups and staple-holes along the bottom; pencil notes, date stamp and caption on verso The caption reads: “From a 1959 wallet photo: It was, recalls a friend, her ‘Natalie Wood period’ / The 1959 yearbook of Whitefish Bay High School noted that Bern had been a member of the pep club, the youth council and Future Nurses Bern joined the last group because one of her close friends became terribly ill and she displayed, quite early, deep compassion”Detroit: Detroit Free Press, May 28, 1976 Press photo, 204 by 252 cm Good with light creases, touch-ups and staple-holes near the bottom; date stamps, notes and news clippings on verso One news clipping, dated May 28, 1976 tells about the documentary “Underground” and the FBI’s interest in the film A second, smaller clipping, October 22, 1979 mentions that the FBI has dropped riot charges against seven of the Weathermen (Inventory #: 1563)
$110.00 add to cart Available from Bay Leaf Books
Share this item