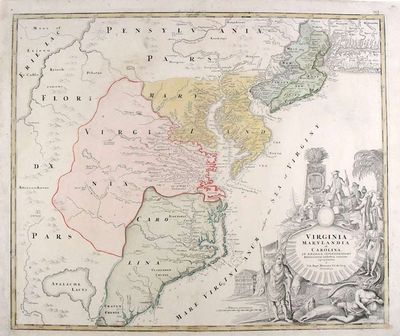 by HOMANN, Johann Baptist (1663-1724)
Nuremberg, 1730. Copper-engraved map, with full original colour. Good condition, with small expert repairs to margins. A strong impression of a highly decorative and historically important map of Virginia, and most of the east coast, by an eminent German cartographer.

This very attractive map was devised as a propaganda tool, to showcase Virginia as a land of plenty to prospective German immigrants. Homann first printed this map in 1714, including it in his Atlas Novus. That year, Alexander Spotswood, the Lt. Governor of Virginia, founded Germanna, a colony for German immigrants on the banks of the Rapidan River, identified on the map as "Germantown / Teutsche Statt". English settlers had proven reticent to migrate to the colony's interior, leaving it vulnerable to French and native encroachment. Spotswood hoped that a wave of German immigration would act as a protective bulwark for Virginia, while also making him a fortune from related property speculation. While Virginia is geographically given the place of honour in the centre of the map, the art of persuasion is principally conveyed by the large title cartouche occupying the lower right of the map. Surrounding an open scallop shell, the iconography of Utopia is presented with blazing intensity. Natives, shown as "noble savages", in the manner of Theodore De Bry, offer their wares. Well-attired Europeans are shown enjoying a realm bursting with gold, kegs of libations, fish, produce and exotic animals. An opportunity to experience such a paradise must have appealed to Homann's intended audience. Importantly, while Virginia is the focus, the map embraces a vast portion of the eastern seaboard, from South Carolina to Connecticut, and is geographically quite conservative, save for the appearance of part of an impossibly large and misplaced Lake Erie in the upper left corner, and the imaginary lake "Apalache Lacus" in the lower left. One of the most celebrated cartographers of his day, Johann Baptist Homann established the most successful German publishing house of the eighteenth century. His prolific business, which was inherited by his family after his death, dominated Germany's map market for over a century, and produced some of the finest maps and atlases of the age. He established himself in Nuremberg, and by 1715 was appointed Geographer to the Emperor. After Homann's death, the business was taken over by his son, Johann Christoph. From 1730, the firm was entrusted to a committee of family members, the Homann Heirs, who published maps and atlases for the next two generations, maintaining the high standards set by Johann Baptist.