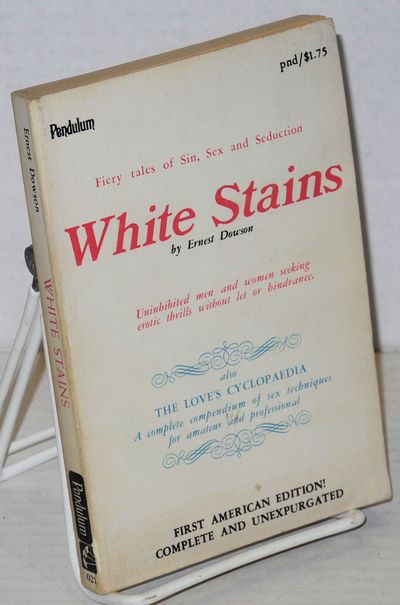 by Dowson, Ernest [pseudonym of...?]
Atlanta: Pendulum Books, 1967. Paperback. 183p., very good first mass-market paperback edition thus in white wraps, pink and blue titles. Pendulum pnd 021. A collection of erotic stories from the 1940s originally published by Isidor Liseux in Paris. The stories have been attributed to Anais Nin, Caresse Crosby, Henry Miller and others. Dowson was a nineteenth century poet (accused by some of being Jack the Ripper!) and was clearly a pseudonym. Samuel Roth has been suggested as the original publisher. Delectus Books has published a facsimile and the original editions are to be found at the Kinsey Inst. A fuller report can be found in "Adventures in the Skin Trade; or the Enigma of 'White Stains'" by Benjamin Franklin V. (Inventory #: 201685)
$35.00 add to cart or Buy Direct from Bolerium Books
Share this item