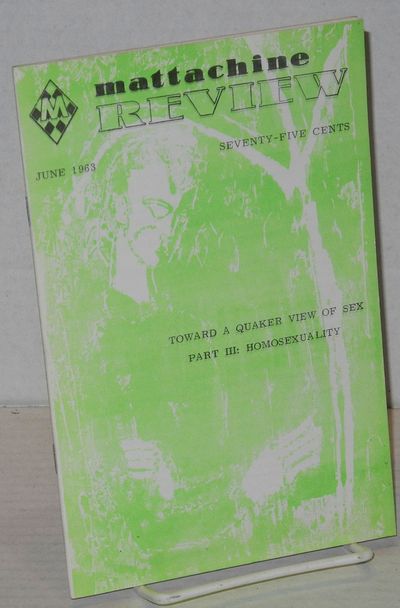 by Call, Harold L., editor, Alastair Atherton, William Lambert, W. A. Ketterer, MD, Gene Damon [aka Barbara Grier]
San Francisco: Mattachine Society, 1963. Magazine. 36p. including covers, 5.5x8.25 inches, very good digest size magazine in stapled pictorial wraps. "Toward a Quaker View of Sex" part 3. Venereal Disease and Homosexual Contacts.
The Review was published by the San Francisco-based homophile society, one of the earliest of its kind, formed in 1950. The magazine began publishing in 1954. The Mattachine Society, forerunner of Daughters of Bilitis, One, Inc. and Homosexual Information Center etc., founded in 1950 in Los Angeles by Harry Hay and Rudy Gernreich.A member of the CPUSA, Hay structured the small group like a Communist Party cell. Hay was expelled from the CP (at his own insistence) as a "security risk" to the party because of his involvement in the Society. The name derives from a French medieval and renaissance masque group. The magazine was founded in 1954 with the first issue appearing in January, 1955. (Inventory #: 201670)
$45.00 add to cart or Buy Direct from Bolerium Books
Share this item