Springtide of Life, The 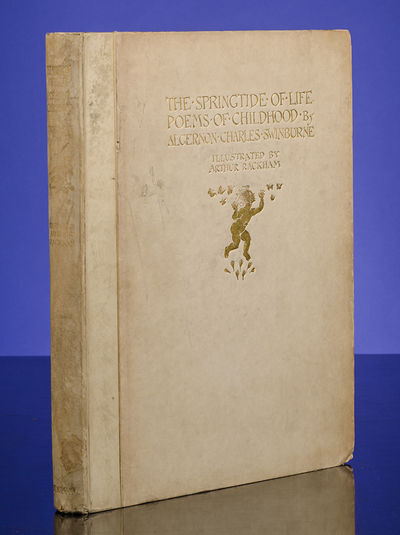 Edition Deluxe limited to 765 numbered copies signed by Arthur Rackham (this copy being no. 752).

Publisher's quarter vellum over parchment boards. Front cover and spine lettered and decorated in gilt. Original plain white endpapers. Publisher's ink presentation on front free end-paper "For Sylvia Henley - Their guardian of the 'Springtide' With all good wishes from the Publishers of this book. Xmas 1918." Three of the tipped-in color plates (frontispiece and facing pp. 2 and 132) have slight creases, the original binding is somewhat soiled and the spine is rubbed. This is a very reasonably priced copy which was presented by the the publishers to Sylvia Henley - the sister of British aristocrat and socialite Venetia Stanley(1887-1948) who corresponded freely with Prime Minister H.H. Asquith between 1910 and 1915. The signed limited edition contains one extra colored plate that is not found in the trade edition - the frontispiece.

The signed limited edition contains one extra colored plate that is not found in the trade edition - the frontispiece.

"[Rackham's] drawings for Swinburne's poems of childhood, The Springtide of Life...attracted the admiration of Edmund Gosse, who expressed his appreciation in a preface and told Rackham personally (18th October 1918: 'This volume will not merely be he best book of the present art-season, but a joy to all sensitive people for years and years to come'" (Hudson, Arthur Rackham His Life and Work, p. 108).

"As the close of his life approached, Swinburne frequently expressed his intention to extract from his various volumes those poems which were addressed to children, or were descriptive of child-life, and to publish them in a separate collection. He died without having found occasion to carry out this plan, and he left no directions with regard to the way in which it ought to be done... One reason why Swinburne never brought out such a collection was his failure to find an artist who could interpret to his satisfaction the simplicity and freshness of his verses. We are fortunate in having secured, in Mr. Arthur Rackham, one whose delicate and romantic fancy is in sensitive harmony with Swinburne's, and who understands, no less than he did, how "Heaven lies about us in our infancy." (Edmund Gosse),