Shadows on the Wall or Glimpses of the Past. A Retrospect of the Last Fifty Years. Sketches of Noted Persons Met with By the Author. Anecdotes of Various Authors, Musicians, Journalists, Actors, Artisans, Merchants, Lawyers, Military Men, &c. &c 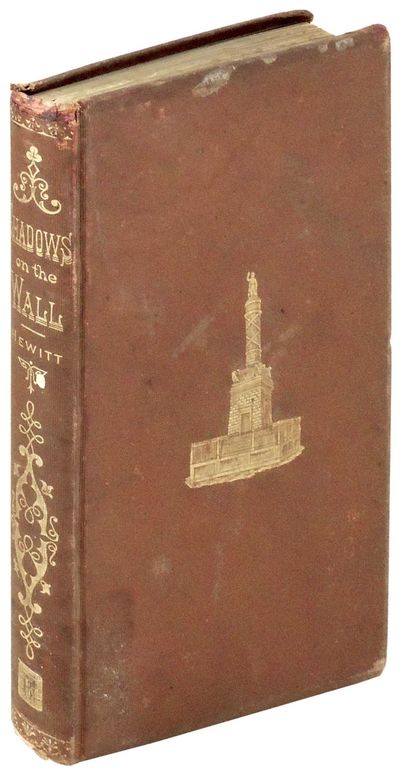 by Hewitt, John H.
Baltimore: Turnbill Brothers, 1877. Hardcover. Very Good. Hardcover. RARE BALTIMORE TITLE. First Edition. The author, a native of Baltimore, was an esteemed poet and talented musician, well known for his political beliefs and his support for the Confederate army, which earned him the title, "Bard of the Confederacy." He also wrote a severe criticism of Edgar Allan Poe's "Al Aaraaf Tamerlane," but the comments concerning Poe in this title are brief and without resentment. Very good in beveled burgundy cloth boards with gilt title and decoration to spine, and a gilt illustration of the Washington monument in Baltimore to both boards. An ex-library copy with evidence of a removed spine sticker to spine and edges of boards and another removed sticker to rear free endpage. Bookplate of Robert L. Weinberg to front pastedown and previous owner name in pencil to front free endpage. Chipping to cloth along spine ends and corners, speck of white paint to spine, and a few spots of soiling to boards. Chipping to edges of front free endpage and front pastedown. The top edge of the dedication page has been cut away where it appears a previous owner had once signed. Soiling to a few pages and occasional spots of foxing throughout. 249 pages BALT/010416. (Inventory #: 28885)
$175.00 add to cart or Buy Direct from
Kelmscott Bookshop
Share this item

Anatole and the Toyshop

New York : McGraw-Hill Book Company , 1970
(click for more details about Anatole and the Toyshop)
View all from this seller>