Curtis Bay; Its Superior Advantages and Admirable Location as the Only Existing and Available Deep Water Harbor Contiguous to the City of Baltimore, in Connection with its Rapidly Increasing Local Manufacturers, the Development of its Coal Traffic, and the Accommodation of its Western and Southern Railroad Connections 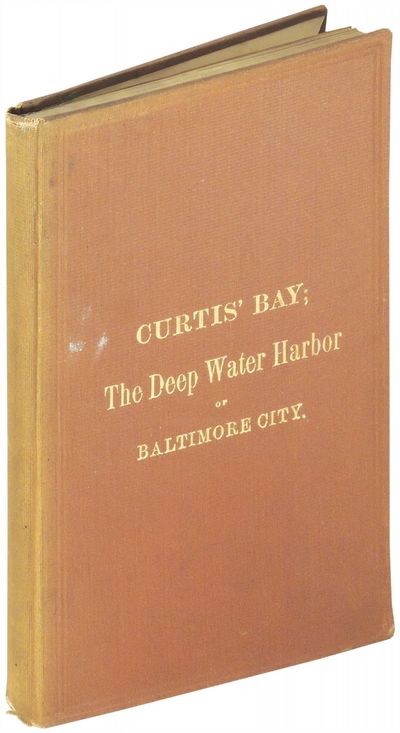 by Patapsco Land Company
Baltimore: Patapsco Land Company, 1874. Hardcover. Very Good. Hardcover. First Edition. Presentation inscription from William C. Pennington to the architect Benjamin H. Latrobe dated November 14, 1874. Pennington was the president of the Patapsco Land Company at the time of publication, and he was also one of four directors. This publication was intended to persuade the City of Baltimore to invest in developing the Curtis Bay area with an extension of the railroad, development of the harbor terminal, and development of local industry. It is broken up into eight sections outlining the present condition of Baltimore, the advantages of utilizing the Curtis Bay area, the present harbor conditions, reasons for investing in Curtis Bay terminal rather than attempting to expand the Baltimore terminal, and a plan created by Patapsco Land Company for developing their property. In brown cloth boards with gilt title to front cover. Minor wear and fraying to spine ends and corners and minor soiling to front cover. Smudge mark to margin of title page, offsetting to endpapers, and minor foxing to a few pages, but clean overall. Includes fold-out map in rear pocket showing greater Baltimore and the railroad connections with Curtis Bay and Pennington. Offsetting to one panel of the map from the pocket. Browning and few closed tears to some of the creases. 100 pages plus map. BALT/010516. (Inventory #: 28888)
$375.00 add to cart or Buy Direct from
Kelmscott Bookshop
Share this item

London : Macmillan and Co , 1878
(click for more details about Swallow-Flights)
View all from this seller>