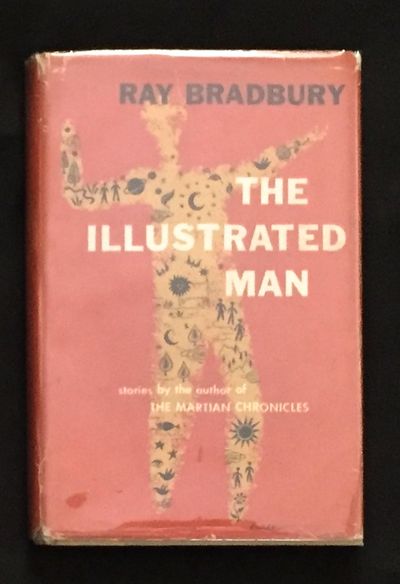 by Bradbury, Ray
Garden City, New York: Doubleday & Company, 1951. First Edition. Cloth. Near Fine/Very Good +. Ray Bradbury. SIGNED, dated, & Illustrated with a CARICATURE of himself by the Author; 8vo, beige buckram, red pictorial dust jacket, 251 + [1p. Epilogue} + [2] pages. Rare copy of Ray Bradbury's important collection of stories with his amusing SELF PORTRAIT/CARICATURE; inscribed to "Joel!' by the author; dated Oct. 23, 72." This third collection of short stories by the great Sci-Fi author includes "Prologue: The Illustrated Man," "The Long Rain," "Zero Hour," "The Velt," and "Kaleidoscope," among several other titles. According to Clute & Nicholls, Encyclopedia of SF: "RB's vintage years are normally thought to be 1946-55, his short-story collections of that period are certainly superior to those he produced later. They began with The Illustrated man (coll. 1951; with 2 stories added and 4 deleted, rev. 1952 UK), in which the tales are given a linking framework; they are all seen as magical tattoos which, springing from the body of the protagonist, become living stories. Three were filmed as The Illustrated Man by Jack Smight in 1968" (p.152). Rod Steiger starred in the film. Dust jacket has been slightly trimmed at corners not affecting the price of "$2.75" (therefore, first state) with slight rubbing and a few minute tears at extremities of the very good or better jacket. Two 1/2" neat red pencil streaks on rear pastedown. Bleiler, Guide to Supernatural Fiction, 256; Anatomy of Wonder (1995), "Best Books": 769; Locke, Spectrum of Fantasy, I p.39; Survey of Science Fiction Literature II, pp.1008-13. (Inventory #: 323)
$2,250.00 add to cart or Buy Direct from
Borg Antiquarian
Share this item

AUTHORIZATION for PRINTING a "PROCLAMATION for a DAY of THANKSGIVING"; viz., An Official American [Connecticut] Proclamation to Commemorate Thanksgiving

[Connecticut] : State of Connecticut to Messrs. Meigs, Bowen, and Dana , 1784
(click for more details about AUTHORIZATION for PRINTING a "PROCLAMATION for a DAY of THANKSGIVING"; viz., An Official American [Connecticut] Proclamation to Commemorate Thanksgiving)
View all from this seller>