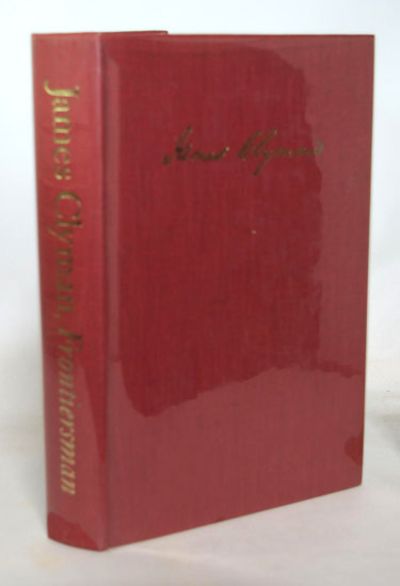 by Camp, Charles L.
Portland: Champoeg Press, 1960. The 'Definitive' Second Revised Edition. Fine in red cloth covered boards with gilt text stamping on the spine and front board. A small quarto measuring 10 1/4" by 6 3/4". Without a dust jacket as issued as we believe. 352 pages including an index, chapter notes, appendices, text and illustrated with maps and reproductions of photographs. The first edition of this book was done by the California Historical Society in 1928 with a printing of only 330 copies of which only 300 were sold to the public. This edition was published to rectify the extreme shortage of the first edition and to bring to light new information and correct editorial errors contained in the first edition. This is one of only 1,450 copies produced with many pages un-cut. James Clyman was one of the original co-founders of the Oregon Trail. He was a companion of Jedediah Smith, Tom Fitzpatrick and Jim Bridger. He made his first venture into the Rocky Mountains in 1824 and later was the first to travel the full length of the Platt River. In 1844 he became an emigrant joining a wagon train to Oregon. He settled in the Napa Valley, California ruturning to "the States" in 1846 to encourage more settlers to come to Napa. Very uncommon and a beautiful volume which has not been read as much of the text block remains uncut. (Mattes, 7, 102, & 169 all with five stars recognizing the historical and literary value of Clyman's journals.), (Howes, C-81 says of Clyman that he provides "one of the most trustworthy narratives of the far west, for the period 1842-6....") (Inventory #: TB28168)
$100.00 add to cart Available from
Town's End Books
Share this item

Cleveland and New York : The World Syndicate Publishing Company , 1936
(click for more details about Webster's Universal Dictionary Of The English Language (Volumes 1 & 2))
View all from this seller>