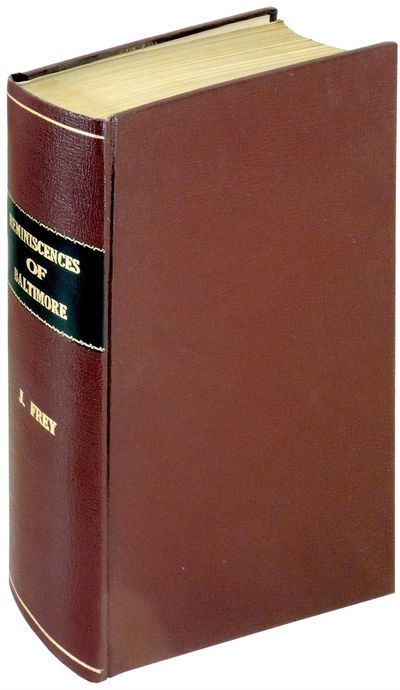 by Frey, Jacob
Baltimore: Maryland Book Concern, 1893. Hardcover. Very Good. Hardcover. Jacob Frey was a police officer who was appointed to captain in 1867 and promoted to Marshal in 1885. This book is filled with his recollections of growing up in Baltimore, his "life of official activity, personal contact with many public men, and participation in many noteworthy events." He discusses cases he was involved with such as the Wharton-Kethcum case in which the wife of a U.S. Army Officer was accused of poisoning a General and more. The book includes 31 chapters on the Mexican War, the Story of Emily Brown, The Wharton-Ketchum Case, the Stage in Baltimore, the Press, Public and Recent Buildings, and much more. Very good in modern maroon cloth boards with black and gilt title label to spine. There is a large dampstain on the front endpaper which grows smaller on each subsequent page. Most pages only have a small, slight discoloration along the one corner of the margin. There front endpapers and edge of the frontis have a few small tears along the margins. The edges of a few pages are chipped. Aside from the mentioned dampstaining which effects mainly just the first few pages, the interior is very clean. Includes many full page photographic illustrations. Full edges gilt. Tight binding. 468 pages. BALT/010716. (Inventory #: 28920)
$75.00 add to cart or Buy Direct from
Kelmscott Bookshop
Share this item

Bibliotheca Anti-Quakeriana; or, a Catalogue of Books Adverse to the Society of Friends, Alphabetically Arranged; with Bibliographical Notices of the Authors, together with the Answers Which have been Given to some of them by Friends and Others

London : Joseph Smith , 1873
(click for more details about Bibliotheca Anti-Quakeriana; or, a Catalogue of Books Adverse to the Society of Friends, Alphabetically Arranged; with Bibliographical Notices of the Authors, together with the Answers Which have been Given to some of them by Friends and Others)

by [Books on Books]