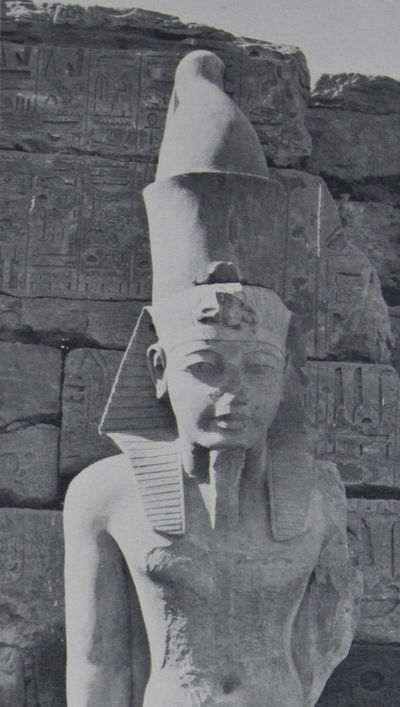 - Volume I (Plates 1-78) Ramses III's Temple Within the Great Inclosure of Amon (Part I): Elephant folio: 19 1/4 x 23 3/4". XIX, [1]pp (Text), 78 leaves of plates. Original brown and brick cloth, with gold lettering to spine. Photographic frontispiece counted as a plate. The Temple of Karnak is the largest Temple in the World. The complex contains a group of Temples such as the Great Temple of Amon Ra, The Temple of Khonso, The Ipt Temple, The Temple of Ptah, the Temple of Montho and the Temple of the God Osiris. A 65 feet (20m) high, mud brick enclosure wall, surrounded all of these buildings. This great Temple of Amon Ra was known during the Middle Kingdom period as Ipt-Swt, which means the Selected Spot. It was also called Pr-Imn, which means the House of Amon. The name Al-Karnak in Arabic was derived from Karnak, which means fortified village, probably because the Arabs found many Temples and buildings in the area when they entered it for first time. On the right side is the Temple of Ramses III. This Temple consists of a small pylon, an open court and Hypostyle hall, leading to the sanctuary. This second volume contains no less than 5 figures and 78 single and double leaves of plates. Most of the plates are comprised of b/w photographs reproduced in photogravures, as well as line drawings.

- Volume II (Plates 79-125) Ramses III's Temple Within the Great Inclosure of Amon (Part II) and Ramses III's Temple in the Precinct of Mut: Elephant folio: 19 1/4 x 23 3/4". XI, [1]pp (Text), 47 leaves of plates. Original brown and brick cloth, with gold lettering to spine. Photographic frontispiece counted as a plate. The Precinct of Mut, located near Luxor, Egypt, is one of the four main temple enclosures that make up the immense Karnak Temple Complex and occupies some 37 acres (150,000 m²). It is dedicated to the Egyptian goddess Mut, the mother goddess. The area in which the precinct is located was originally known as Isheru (or Asher). Isheru was the name of the spring-fed, crescent-shaped lake on the site of this portion of the temple complex. It has been used, added to, or enhanced from the 18th Dynasty to the Graeco-Roman Period of rule in Egypt. By the 1st century CE its use steadily declined and when worship of Mut ended, so did the function of the complex. The passage of time has not been kind to the precinct. Today, the site is so levelled that practically nothing over one metre high is still standing. Hundreds of statues are scattered all over the central part of the site. This second volume is splendidly illustrated with 5 plans and 47 single and double leaves of plates. Most of the plates are comprised of b/w photographs reproduced in photogravures, as well as line drawings.

- Volume III, The Bubastite Portal: Folio (15 x 19"). XIVpp (Text), 23 loose leaves (Figure and Plates), as issued. Original quarter brown cloth portfolio over printed paper covered boards, with black lettering to front cover. String ties. The Bubastite Portal is the south entrance to the great First Court of the Temple of Amun at Karnak. It was architecturally conceived as a uniform part of the wall and colonnade surrounding the court. Had it not been for the presence of the temple of Ramses III in the way, this entrance would probably have been placed directly opposite the north entrance at a point almost exactly in the middle of the Ramses temple. Under the circumstances it was built to occupy the space between the Second Pylon and the Ramses temple, and became somewhat more elaborate than the north entrance by the necessary addition of a pilaster against each of the earlier structures. This third volume of the series contains 1 full page figure, and 22 single, double, and triple leaves of plates. Most of the plates are comprised of b/w photographs reproduced in photogravures, as well as line drawings.

A fourth volume (not included with this collection) dealing with "The Battle Reliefs of King Sety I" was published in 1986 (50 years after the publication of the first two volumes).

Ex-library copies with sticker at tail of spines and at upper margin of front covers, as well as bookplates on inside of front boards. Minor shelf wear. Bindings and interior in overall very good condition. (Inventory #: 40035)
$1,250.00 add to cart or Buy Direct from
Eric Chaim Kline Bookseller
Share this item